Downtown Phoenix’s Growing Popularity is Pricing Out Many Residents

Downtown Phoenix’s Metro housing boom is blanketing the area with thousands of new apartments and condominiums.

But the rents and prices for the new homes will shut the door on some who want to live in the area. and home prices in historic neighborhoods in and around downtown Phoenix are soaring as the area becomes more popular, further limiting Metro Phoenix potential buyers.

“It’s heartbreaking that the teachers and those working in the area’s hotels and cafes can’t afford to live in downtown,” said Cindy Dach, downtown Phoenix proponent, resident and business owner. “The area won’t be diverse unless we plan housing for everyone.”

“We need the entire spectrum of housing in downtown Phoenix,” said Patricia Garcia Duarte, CEO of the housing non-profit Trellis. “Many people forget affordable housing is needed to create a healthy community.”

Most of the 8,000 apartments recently built, underway or planned in downtown Phoenix are in luxury complexes with rents higher than the average Valley mortgage.

“I saw rents rising, and the chance to buy a condo before those prices climbed too,” he said.

Zaragoza said all of the new development going on downtown “is exciting,” but he’s glad to be his own landlord and not dealing with rent hikes.

If too many apartments go up and don’t fill up fast, rents could fall in downtown Phoenix.

Also, though rents are high in downtown Phoenix, they are still $50 to $100 lower a month than rents in downtown Scottsdale and Tempe.

Can you still find an affordable house In Phoenix, AZ?

Aysia Williams and Benjamin Hughes rented in Phoenix’s Woodland Historic District, on the western edge of downtown, for about a year before trying to buy their first home.

“We fell in love with the area, but saw prices and rents climbing fast,” Williams said. “We knew we wanted to buy, but there was a lot of competition for the houses we liked.”

Woodland is part of the 85007 ZIP code, one of central Phoenix’s more affordable neighborhoods. The area, which has also attracted many investors, saw its overall median home price climb 10 percent to more than $192,000 in 2017. Sales in the area jumped nearly 20 percent last year.

The couple’s house, for which they paid less than $250,000 a few months ago, was never even listed for sale. They were renting in the neighborhood and searching for a home they could afford when they met a longtime homeowner who didn’t want to sell to an investor.

People talk about the gentrification of central Phoenix pricing too many first-time homebuyers out. Buyers can still find affordable homes if they look hard enough.

The issue is that those units are reserved under federal law for “very low-income” individuals who have a median annual income of  $14,000-$38,000.

Stotler said the real downtown housing gap is in “workforce housing,” for middle-income individuals who make $38,000-$48,000 annually. These individuals would have to pay nearly 50 percent of their income to afford living in market-rate housing downtown which is not reasonable or sustainable, she said.

“To me, the area that we’re missing in downtown is the working people’s housing. And people who are not like a lawyer or something and making a lot of money, but they’re just average working people,” she said. “There’s no regular housing for them. We’re not building that.”

To get workforce housing downtown, the city likely won’t be able to rely on traditional developers, Stotler said.

Land prices are high, which makes it difficult for developers to offer middle-income rents and still turn a profit on their projects, she said.

Garcia Duarte said financing is also difficult for more affordable housing, which deters some developers from building it.

Stotler is looking to city-owned land in downtown as a possible solution to this issue. She hopes to find developers or non-profit groups that may be able to build middle-income housing on these lots.

Stotler would like to take some of the city’s housing projects and redevelop them as denser projects with more units available for middle-income households.

For example, Deck Park Vista is a garden-style apartment complex with just 56 units on two acres of land. Stotler said she could fit between 200-400 units on the land.

“It’s a poorly designed project for the downtown,” she said.

Stotler said the city has 10 other senior housing options across Phoenix, including some near downtown, like the Warehouse District, where the current residents could be moved to accommodate a new multistory project on the land with 200 workforce units and 50 affordable units.

Financing the project won’t be easy. While the city gets federal assistance to provide low-income housing, there are far fewer resources to build and provide middle-income housing, Stotler said.

“That’s where I’m struggling right now, is where we can get the funding to build all these workforce units,” Stotler said.

Instead, the city council can, and has, put pressure on developers to include a percentage of affordable or workforce housing in its projects if they want special perks from the city like a tax break or extra height.

Recently, the developer of an apartment project planned at the Arizona Center agreed to reserve 10 percent of its 354 planned units for workforce housing in exchange for a tax break.

Mansion by Former Frank Lloyd Wright apprentice is on the market

This Phoenix mansion designed by former Frank Lloyd Wright apprentice is on the market for $8.75 million

A Phoenix mansion designed by Vernon Swaback, one of the last living former apprentices to famed architect Frank Lloyd Wright, is for sale. View pictures.

And the 13,365-square-foot home can be yours for a cool $8.75 million, one of the priciest homes for sale in the city of Phoenix, according to Realtor.com.

The property at 15 Biltmore Estates Drive sits on about 1.67 acres and includes seven bedrooms and 10 bathrooms. The home abuts the Adobe Golf Course in the Biltmore neighborhood and features resort-like grounds, custom-made limestone columns and surfaces as well as Brazilian hand-scraped cherry wood floors, an expansive master suite, bar, pool and whole slew of other high-end amenities and features.

The property previously was on the market with a price higher than $9 million, but it was de-listed roughly a year ago before going back up for sale earlier this year. 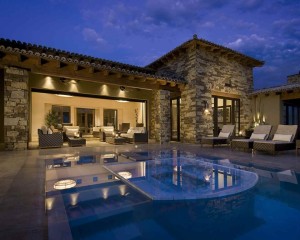 In some pockets across the country, however, luxury sales soared. For example, sales of $1 million-plus homes last year jumped 32 percent year-over-year in Austin, which is seeing a boom in its tech and entertainment industries. Other markets that are seeing large growth include Fort Lauderdale (up 31%) and Seattle (up 30%), according to the report.

Florida earned the top spot as the main destination for real estate’s high-priced segment. Luxury sales posted double-digit growth in Miami, Naples, and Palm Beach. Newcomer areas like Lake Worth and Wellington, also placed in the Top 20 list for $10 million sales for the first time, the report showed.

The following are the 20 top performing cities in the luxury real estate market for $1 million-plus sales, according to the latest report:

If you’re looking to buy real estate in Scottsdale, whether it’s a single-family home or a condo in an amenity-laden high-rise with 24-hour valet and concierge services, or a historic Scottsdale home, we can help you design a lifestyle tailored just for you.

If you like Scottsdale, you’ll probably like Paradise Valley which is situated between Scottsdale and Phoenix. Paradise Valley consists of 16-square-miles of tranquil oasis with large lots, unobstructed mountain views and acre-plus zoning.

For additional information and for a tailored, custom luxury homes search in Scottsdale, Paradise Valley or Historic Phoenix, contact me today.