Metro Phoenix Starting to Grow Up Instead of Out

The Valley is seeing new inward development, a change from the outward expansion typical of metro Phoenix.
Mark Quinones/azcentral.com

There’s an urban revival going on in the Phoenix Valley, which has long been known for its affordable suburban homes.

Karen Wang is buying a condo in the new 14-story Portland on the Park development in downtown Phoenix.

Her new home is going up on a prime piece of land next to Margaret T. Hance Park that was a dirt parking lot when she moved here from the San Francisco Bay Area for culinary school 12 years ago.

Of course, metro Phoenix had plenty of empty lots back then. It was rated as one of the cheapest metro areas for parking in the U.S. in the mid 1990’s because it had so much vacant land, especially downtown.

Now, construction cranes and new housing, restaurant and retail developments can be found on many of those long-vacant parcels across central Phoenix, Scottsdale, Tempe, Mesa and Glendale.

The Valley, an area that for so long has grown outward with new, affordable suburbs, is having an urban revival. 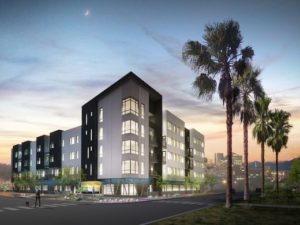 Portland on the Park project at Central Avenue and Portland Street

Millennials and Boomers are behind the shift in metro Phoenix’s development. They want to live where they can walk or ride bikes to where they work or play — or both.

Builders are responding with many new high-density, high-rise condominium and apartment projects near popular eateries and shopping hubs. Not only are vacant lots being filled; older, often empty buildings are being transformed as well.

“I want a more urban lifestyle that wasn’t available when I first moved here,” said Wang, 39, who is moving downtown from the Arcadia area of Phoenix. “I am looking forward to walking just a few minutes to restaurants and the dog park.”

Her commute to her retail job in Scottsdale will get longer, but her partner, Logan Stephenson, works in downtown Phoenix.

Most urban planners support infill and high-density development because it uses less water, cuts back on freeway traffic and can create more walkable neighborhoods.

“It is a reflection of the Valley maturing as a metro area when the value of land closer in becomes more valuable and demands higher uses or basically more density,” said Mark Stapp, a growth expert and director of the Master of Real Estate Development program at Arizona State University.

“It’s a good thing for growth,” he said.

The Valley may never be Manhattan, but …

Phoenix will never be a San Francisco, Manhattan, London or Hong Kong for high-rise living.

The Valley also still lags other big cities such as Chicago, Portland and Denver for urban redevelopment. And growth on the Valley’s fringes will continue.

But metro Phoenix is already a higher density city than most people realize.

“Too many people equate the Valley’s growth with sprawl,” said Grady Gammage Jr., author of the new book “The Future of the Suburban City: Lessons from Sustaining Phoenix.”

An average of 3,200 people live per square mile of the Valley, according to the Center for Neighborhood Technology, a national growth think tank.

Gammage, who has been analyzing metro Phoenix’s growth for decades, said that makes the Valley a more dense area than Seattle, Houston, Charlotte or Atlanta.

Los Angeles is the densest U.S. city with an average 7,000 people living in every square mile. Second is Las Vegas with 4,500 people per square mile, he said.

But more condominiums and apartments are under construction or planned in the Valley now than any time since the boom. Most are going up in the central Valley on infill sites.

People often try out an area by renting, experts say. Then they’ll buy if they really like it.

“Apartments lead the way for condo construction,” said Tom Simplot, CEO of the Arizona Multihousing Association and a former Phoenix city councilman. “People first became comfortable living in that area, and are now converting to ownership.”

Metro Phoenix’s typical growth trend has been reversed with infill.

“In the last 15 years the major urban cores of Phoenix, Scottsdale and Tempe have transformed to the extent that the population is now demanding planners make them increasingly vibrant,” said David Newcombe, a co-founder of Scottsdale-based Launch Real Estate and broker at Portland on the Park.

He said the trend for urban growth is being powered by “people wanting to take back ownership of their life.”

High-density and vertical developments aren’t just going up in Valley downtown’s anymore, either.

If an area has a popular restaurant and shopping hub, then developers are building, believing buyers will come.

Pat and John Simpson are moving from their home in north Scottsdale’s DC Ranch to a new luxury condo at Optima Kierland. The 12-story development is going up on the Phoenix/Scottsdale border next to a resort, popular shopping and restaurant hub near the Loop 101 Freeway.

“We are downsizing but not downgrading to an area where we can walk to get a cup of coffee or a meal,” said Pat Simpson, a real-estate agent with Russ Lyon Sotheby’s who moved to the Valley from New York a decade ago.  “We want views and amenities.”

In April, more than 1,400 new and used condos sold, according to The Information Market. That’s the highest monthly tally since mid-2007.

“Creating higher-density housing like condos near central areas strengthens communities and provide people with an alternative way of living in the Valley,” said architect David Hovey Sr., who developed the Optima condos in Scottsdale and Phoenix’s Biltmore area and now is building in Kierland.

Kierland, where a 12-story condo building is on the rise, is among the suburban areas drawing higher-density housing. Others include:

Moving in, up or down

These huge demographic groups seem to want to spend less time in their cars and taking care of homes with yards.

The Koch family represents both. Ann, 55, and Bob Koch, 59 live in north Phoenix but are buying a new condo in downtown Phoenix’s en Hance Park for their daughter Kayla to live in while she goes to ASU.

“We looked at renting an apartment for Kayla downtown and then realized buying could be a better deal,” Bob Koch said.

He said when their daughter moves out, the couple plan to keep the condo, stay there themselves and share it with family and friends who want to enjoy downtown.

Kayla Koch, 21, said she will walk to class and take light rail to her job in Uptown Phoenix at Flower Child restaurant.

“There’s these new type of ethos and feeling about living in an area where you can walk to a park, so many restaurants, museums and things to do,” said Aaron Carter, broker for en Hance. “More people are letting go of the trappings of a larger home to be in a great location, particularly if it’s near light rail.” 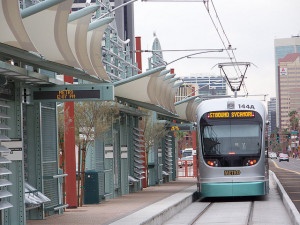 Some may question whether light rail has drawn enough riders to be considered a success, but few dispute the train tracks have drawn development and created new Valley growth hubs.

Several of the Valley’s most popular new restaurant and shopping areas stretch along light rail from Midtown Phoenix to downtown and out to Tempe and Mesa. Housing has followed the train.

Some planners expect to see similar hot spots for development in Glendale as light rail expands there.

He had been living in north Phoenix and found himself driving everywhere, including to central Phoenix to hang out with friends.

Five years ago, he began renting on Roosevelt Row. Now, he’s buying a condo at Portland on the Park. 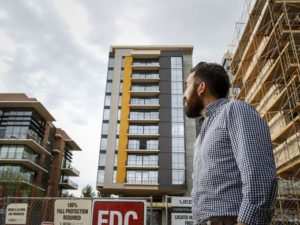 “Downtown is great. I can either bike or take the train wherever I want to go,” said Zaragoza, 29, a senior financial manager in Tempe. “I only drive my car to go to work.”

“Light rail has created places where people feel like they belong and want to be in the Valley,” she said. “Phoenix is becoming more dense and poised for better growth, thanks in part to its trains.”

Urban planners say one of the biggest benefits from higher density housing is how it improves water conservation. Most infill developments use much less water than traditional neighborhoods with single-family homes.

“A very rough but conservative estimate would be that a typical high-rise household would use at least 50 percent less water than a typical single-family home on the Valley’s fringes,” said Sarah Porter, director of the Kyl Center for Water Policy at ASU’s Morrison Institute.

Based on several recent studies, she estimates a metro Phoenix high-rise home uses an average 4,000 to 5,000 gallons of water a month.

That means a Valley single-family home with a yard uses an average 8,000 to 10,000 of gallons of water each month.

“In the Valley, up to 70 percent of household water goes to outdoor uses, though the average percentage per household has been declining,” Porter said.

Water usage is an important growth factor for cities in the West like Phoenix dealing with shortages and long-term droughts.

But not all urban planners think a big shift to infill development is the right growth path for the Valley.

“Areas with high-dense housing and vibrant downtowns like San Francisco, Paris and Manhattan are unaffordable for most people,” said Joel Kotkin, executive director of the Center for Opportunity Urbanism. His most recent book is “The Human City. Urbanism for the Rest of Us.”

“Affordable cities like Phoenix are now drawing Millennials and families who can’t afford to live in Southern California or on the East Coast,” he said. “I am not sure those people are looking for more expensive high-rise developments in the desert.”

But Gammage and Stapp said they think there’s demand for both infill and high-rise homes as well as more affordable single-family houses farther out in the Valley.

“Not all future growth will occur in the Valley’s core,” Stapp said. “We will need to build on the edges, but more dense regional hubs can also evolve in Gilbert, Mesa, Chandler and other suburbs.”

Density appeals to Wang, who the Bay Area transplant who is moving to downtown Phoenix.

“Part of my pessimism about living in the greater Phoenix area is that I’ve always felt like it was a large suburb due to the sprawl,” she said. “But the growth of Phoenix has dynamically changed in the past five years.”

“But Phoenix can be Phoenix, and it has changed over the years,” she said. “I am happy about the attention and renewal being brought to the heart of the city.”