Get a first look before the new location opens Monday

On Monday, Lou Malnati’s Pizzeria, one of the most famous purveyors of deep-dish pizza, will open up shop at Uptown Plaza, at Camelback Road and Central Avenue in Phoenix. 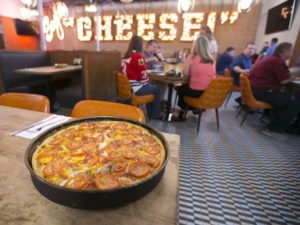 I’m not sure I can defend it, but I sure do love it.

Deep-dish pizza lives at the intersection of brash decadence and pure gluttony.

Take the simple elegance of a Neapolitan pizza, Americanize it and jam it in a pan, then bury it under a pile of cheese and chunky tomato sauce and you have Chicago’s most famous contribution to the world pizza pantheon. Though short on sophistication, it’s a dish that’s long on pure joy.

And on Monday, May 16, Lou Malnati’s Pizzeria, one of the most famous purveyors of deep-dish pizza, will start serving it in Phoenix, at Camelback Road and Central Avenue.

This is one of Chicago’s titans of deep dish, and the chain’s new restaurant at Uptown Plaza will be the 46th branch, but the first outside the greater Chicagoland area.

Though Pizzeria Uno is the first choice of tourists visiting Chicago, Lou Malnati’s always seemed to me the more widely respected establishment among locals, opened by and named for the son of Rudy Malnati Sr., former pizza chef at Uno. The Malnatis are among the first families of Chicago deep-dish pizza, and their claim to its creation is as credible as any other. 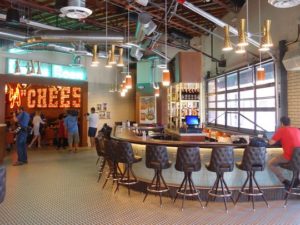 “We ship a lot of pizza to Phoenix,” says Mark Agnew, the president of Lou Malnati’s, who started working at the restaurant when he was 15. “We wanted a market where we felt like people know who we were.”

Malnati’s isn’t merely spreading its seed to the wind with a franchising agreement, as Pizzeria Uno did in the 1990’s with disastrous culinary consequences.

Rather, they’re keeping the business in the family, taking care to ensure the pizza at this Malnati’s is a fair representation of the pizza they serve back home.

Perhaps most importantly, Malnati’s has chosen the fertile soil of a city awash with Chicago expats to plant its first remote location, hoping to draw the kind of ebullient crowds that welcomed Portillo’s to the Valley in 2013.

For the record, my feelings about Portillo’s are somewhat reserved. Though a venerable Chicago institution, I think Portillo’s product is less superlative than it is consistently solid. But I have no such reservations when it comes to Malnati’s.

It wasn’t always this way. Growing up in Chicago, we were a Gino’s East family, routinely feasting on miraculous pies served from deep within the bowels of its original location, a graffiti-covered dungeon of a building just off Chicago’s Magnificent Mile. When we pulled up one day to discover the building razed and Gino’s relocated to the former home of a Planet Hollywood, we jumped ship and consoled ourselves in the embrace of a pizza that — if I’m being honest with myself — was probably a little better.

That was Lou Malnati’s deep dish. We never looked back.

The look of the Phoenix Malnati’s may surprise fans of some of the older locations. 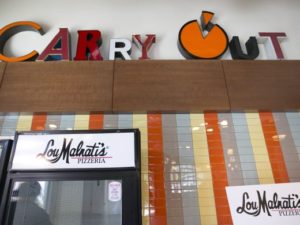 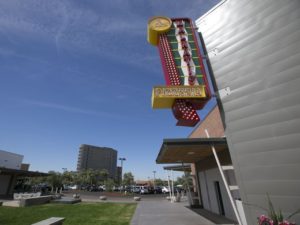 “We try to be a local pizzeria,” Agnew explains. “Each of our restaurants looks different, and we try to fit in.”

The bright colors and wild look of the dining room are a far cry from the original Lou Malnati’s, which opened in Lincolnwood, Ill., in 1971. Folks new to Malnati’s won’t know the difference, but to trigger the nostalgia synapses of old-time Chicagoans, the food will need to carry the day.

We’re talking about a pizza that Jon Stewart famously denigrated as a “casserole.” Though it was meant as an insult, even as a fan of deep dish, it’s a characterization that I have a hard time refuting. We are, after all, talking about your choice of toppings mixed with an abundance of melted cheese and covered with a thick layer of bright, chunky tomato sauce, all stuffed into a dense, crunchy crust that’s buttery and — for reasons unknown — almost always undersalted.

In a national scene now dominated by Chris Bianco’s artfully crafted legacy, deep dish can seem like a dense, clumsy oaf of a pizza whose most compelling feature is its unashamed sense of abandon. But its coarse appearance belies the subtlety within. When it’s on, there is a beguiling, gooey charm in a slice of deep dish. Malnati’s, in particular, challenges the notion that a single slice can feed a family of six. It sure isn’t light, but two or three slices can slide right down a lot quicker than you might think.

In just a few days, families will begin lining up for a taste of Lou Malnati’s deep dish. Here’s hoping the famed pizza lives up to their expectations.