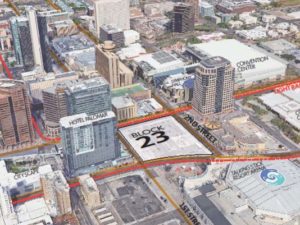 Like many downtown Phoenix residents, I was ecstatic when news broke that Fry’s would be landing a long-desired grocery store in the city core.

And while the store isn’t slated to open for a while, there might be a few things that will require a little extra patience for us long-suffering downtown denizens.

According to a report this week in The Arizona Republic, when developers break ground later this year on the project at Second and Jefferson streets, officials with the city of Phoenix expect them to unearth a bevy of city history including remains of old jail cells and prehistoric artifacts.

That’s right. A bomb shelter. Turns out the parcel of land on which the Fry’s and accompanying mixed-use high-rise will be built has had quite a history. 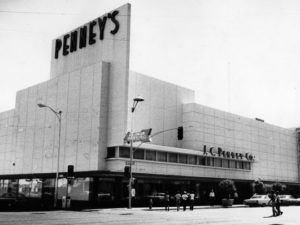 It used to be home to a J.C. Penney store, as well as a city-operated jail.

Phoenix officials told the Republic the bomb shelter made sense in the middle of the 20th Century during the height of the Cold War and when children across the nation spent time in drills learning to “duck and cover” in the event of a nuclear blast.

But for a 21st Century grocery store as part of an ongoing gentrification period? The Republic story doesn’t mention what developers might do with an excavated bomb shelter, though it could be redeveloped into a planned basement for the Fry’s. Developers plan to house the grocery store’s bakery and other operations in a basement.

Regardless, it is likely that if developers do uncover the bomb shelter, it will add a little bit of time to the project’s time table.

Apparently, such historical finds are common for downtown developments.

The Republic reports that construction of the CityScape project in downtown unearthed an old bank vault and other artifacts.