As part of the recent settlement of litigation between the United States and the Barron Collier Company, the federally-owned 15-acre parcel located at the northeast corner of Central Avenue and Indian School Road is now “For-Sale.” The land, which is located amid the booming Uptown Phoenix real estate market, is being marketed as the “Uptown Phoenix Parcel.”

The parcel was recently transferred by Barron Collier Companies to the United States for sale under an agreement that resolved Collier’s legal obligations to the United States dating back to the Congressionally approved 1988 Arizona-Florida Land Exchange Act – a deal that originally included the historic 72-acre Historic Phoenix Indian School site that had been operated as a school for Arizona Indian students for almost 100 years until its official closure by the Bureau of Indian Affairs in 1990. 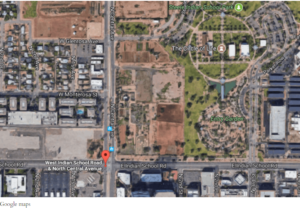 The 15-acre Uptown Phoenix Parcel is located across from a light rail station, just one block south of the Camelback Road and Central Avenue, which was recently named by the Urban Land Institute of Arizona as one of the Valley’s most lucrative intersections for commercial and residential development.

Proceeds from the sale of this Historic Phoenix parcel will be deposited into the Inter Tribal Trust Fund and Navajo Trust Fund administered by the United States for use by tribes in Arizona to seed educational programs and services such as tribal libraries, preschools, childcare facilities, youth foster homes, tutoring and academic counseling for tribal youth, among other programs. Most of these programs have been placed on hold in recent years due to limited funding and uncertainty surrounding the future of these Trust Funds.

Many of Arizona’s current tribal leaders attended the Phoenix Indian School in their youth. When it closed, Congress made sure that the funds generated from the disposition of the property could be used to support a positive and enduring legacy for both the former Indian School, and the future of Indian education in Arizona. While the history of the Phoenix Indian School has been written, tribal leaders also look forward to supporting a new legacy that the sale of this long vacant property now represents.

“We are very pleased to see the that remaining 15-acre property, which is so steeped in the history of tribes in Arizona, will finally have an opportunity to be developed and hopefully become another Phoenix cultural highlight in the future of Uptown Phoenix,” says Inter Tribal Council of Arizona Executive Director, Maria Dadgar. “Not only will the sale of this property begin a new chapter for the City of Phoenix, the funds generated from the sale will also serve the future of Indian education in Arizona as Congress originally intended. Tribal leaders view this as a positive step in the history of the Indian School property,” says Dadgar.

The federally-owned Uptown Phoenix Parcel will be sold by a competitive online auction hosted by the Government Services Administration’s online site www.RealEstateSales.gov and will open for bids later this year.

The Inter Tribal Council of Arizona, Inc., was first established in 1952 to provide a united voice for tribal governments located in the State of Arizona on common issues and concerns. Currently, ITCA’s membership includes 21 of the 22 Tribes of Arizona.