The Brentwood Historic District boundaries are roughly McDowell Road to Interstate 10, and 16th Street to to 20th Streets including the 51. 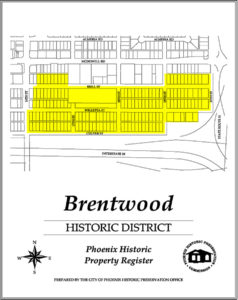 Brentwood Historic District homes were developed between 1926 and 1956, The Brentwood neighborhood is comprised of just 177 households and was designated historic in April, 2003.

The architectural styles and square footage are Tudors and Bungalows which dictate this picturesque historic district inside the core of Phoenix, Arizona. These homes are a bit on the smaller side but loaded with classic charm averaging around 1200 square feet

The square footage in these homes are a little more modest than those of other historic Phoenix districts ranging from about 1,000 to 1,200 square feet however the features are very sharp.

The homes in this affordable district boast original features which are quite prominent inside such as: 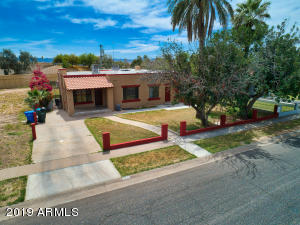 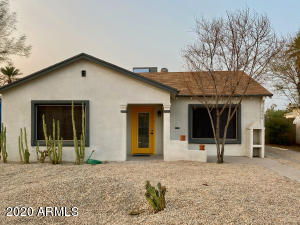 People like Cindy Findley moved to Brentwood in 2007, snapping up a 1930 charmer with three bedrooms and original windows and hardwood floors. She fell in love with the neighborhood’s wide streets, relatively large lots and mix of bungalows, ranch- and Tudor-style homes.

“They’re imperfect homes. They’re all unique, from the style of windows to the color they’re painted to the stucco on the walls,” Findley said.

She also enjoys the central location just north of downtown Phoenix, which puts her close to favorites like the Burton Barr Central Library, Tammie Coe Cakes and her son’s Bioscience High School in the Phoenix Union High School District.

Last year, Brentwood held its first home tour, featuring about a dozen homes, and drew about 750 people to the neighborhood. Next up is a block party this spring. Over the years, Findley has purchased three other homes in the neighborhood as investments. She doesn’t mind Brentwood’s low profile among historic districts.

“Nobody knows this little pocket exists . . . it’s OK that way,” she said.

The Brentwood neighborhood was developed during the city’s booming building periods before, during and after World War II. Early on, the developer touted the neighborhood’s “modestly priced homes . . . with city water, gas and electricity,” according to city records. And though a good bargain, the homes still offered such “modern” features as hardwood flooring.

During World War II, a housing shortage for workers in war-related industries prompted the development of more economical homes with fewer amenities. As with the rest of the city, the end of the war brought a housing craze and Brentwood grew, with more homes aimed at middle-class families, and building through the 1950’s.

Read the History of The Brentwood Neighborhood