Woodland Historic District is westernmost historic district closest to Downtown Phoenix out of all of the historic Phoenix districts, roughly bounded by Grand and 19th Avenues and Van Buren and Fillmore Streets. 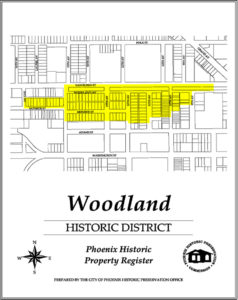 Woodland Historic District, next to Woodland Park, is one of Phoenix’ earliest city parks which separates the residential Woodland neighborhood from the commercially-oriented Van Buren Street.

West of the State Capital

The Woodland historic neighborhood is immediately west of the original Phoenix townsite and in the shadow of the Arizona State Capitol. You can walk to many of the State or Federal buildings if you live in Woodland Historic District.

Architectural Styles and Square Footage in The Woodland Historic Neighborhood

The terrific old homes are dominated primarily by 1920s single-story brick Bungalows with wide front porches and mature trees on the outside, and wood floors combined with many beautiful built-in’s on the inside. A few Neo-Colonial Period Revival styles are also part of the mix. Square footage ranges from 800 to 1200 with 2 to 3 bedrooms and 1 bathroom on average.

There are many affordable fixer-uppers in this district which is in it’s early stages of a neighborhood makeover and is adjacent to Oakland Historic District.

Many of the homes in the Woodland District date back to 1885. Its period of significance is 1880-1935. Woodland’s Historic Designation was given in February 1989.

What are Some Neighboring Historic Districts?

If you like the Bungalow style of Woodland District, you may like the Coronado Historic District and neighboring Oakland Historic District. If you want to be closer to downtown or central Phoenix amenities and want a larger home, look to Roosevelt or F.Q. Story historic districts for some larger Bungalows and Period Revivals. You can probably find a fixer-upper in this neighborhood.as well. If that is something that interests you, please contact me. 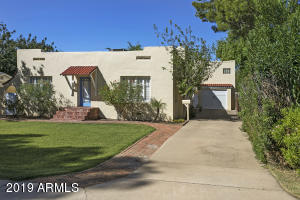