Del Norte Historic Place District is adjacent to the Encanto Golf Course which opened in 1937, making the neighborhood a highly desirable location for homebuyers. 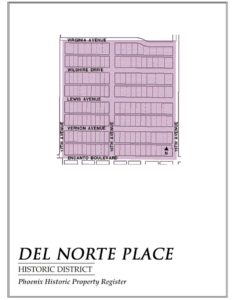 This neighborhood represents a range of architectural styles popular in Phoenix between World Wars I and II. The homes in Del Norte Place average around 1,500 square feet, usually with 3 bedrooms.

The Construction of Homes In Del Norte

Homes in the Del Norte Place Historic District were built between 1927 and 1945. Encanto Park, with its 222 acres of picnic areas, playgrounds, lagoons, wildlife, nature trails and golf courses, made the Del Norte Place district a desirable location for homebuyers in the mid-twentieth century.

Best of Phoenix In 2009: In the realm of central Phoenix historic districts, Del Norte Place is flanked by some heavy hitters: Encanto-Palmcroft, Willo, Roosevelt, and F.Q. Story. But, this little sleeper of a neighborhood, dating to the 1920s, is an idyllic place. So, its broad, tree-lined streets and carefully manicured lawns make you feel you’re strolling back in time, like Mayberry.

What You’ll See and Feel In Del Norte

For starters, people hanging out on their front porches, kids riding their bikes and playing in the streets. Good, old fashioned community fun.

Spend some time driving this neighborhood and you’ll see the obvious and tight-knitted neighborhood mentality in real time. The well-organized Del Norte Place Neighborhood Association is all about being neighborly. They organize neighborhood yard sales and get together’s for Summer barbecue’s, holiday parties, and even Easter egg hunts.

Encanto Park in Phoenix was listed alongside New York City’s Central Park, San Francisco’s Golden Gate Park and Boston Commons as one of the Nation’s 12 Best City Parks according to Forbes Magazine.  Furthermore, Forbes recognized Encanto Park for its old-fashioned qualities and charming attractions. This includes boat rentals and an amusement park, all located in the heart of central Phoenix. 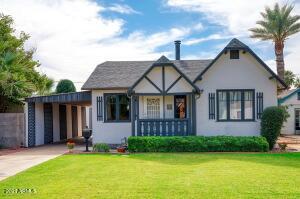