Medlock Place Historic District history, at the time of its development, was considered to be rural. Dominated by fruit orchards and fields with a few farmhouses, and was several miles north of the Phoenix city limits. Due to the explosive growth of the last fifty years, the neighborhood is now in the center of the city. 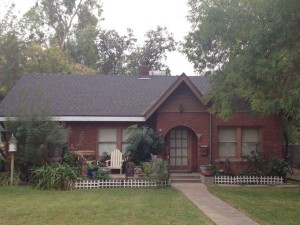 The neighborhood encompasses much of the southwest quarter of the section of land originally subdivided as the Evans’ Addition to Orangewood. This plat extended from Camelback Road north to Bethany Home Road, and from Seventh Street west to Seventh Avenue. Most of the Medlock Historic District resulted from re-platting of the large, 20-acre farm lots of the Evans’ Addition, subdividing them into fifth-acre to half-acre house lots.

The history of Medlock Place’s development of the neighborhood can still be read from the homes and lots themselves. 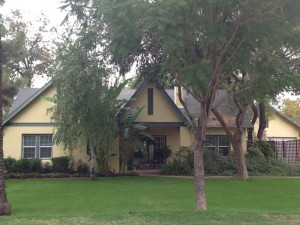 The first major replats were the Medlock Place (1926) and South Medlock (1927) subdivisions, at the south end of the district near Central Avenue, and include lots along Colter Street, Medlock Drive, and, Pasadena Avenue, from Third Avenue to Central Avenue. These two subdivisions feature large, half-acre lots and developed mostly before the Great Depression. For this reason, most homes in these areas are examples of the English Tudor Revival, Spanish Colonial Revival, or late Bungalow styles. 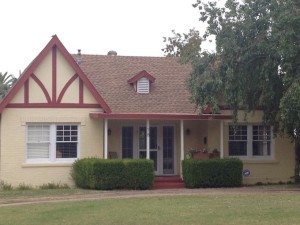 A 1935 English Tudor In Medlock Place

Soon after the Medlock subdivisions began development, the Orangewood Estates subdivision (1928) was platted at the northwest corner of the neighborhood, bounded by Missouri Avenue on the north. 7th Street on the west, Colter Street on the south, and extending a little east of 3rd Avenue.

The plat for Orangewood Estates included 16 one and two acre lots. The Orangewood Estates subdivision saw little development, however, until after World War II. A few prewar homes in the area remain, distinguished by architectural style and by the large size of the lots. The remainder of the one and two acre lots were further subdivided informally into the smaller, typical “city” house lots. Most of these were developed with Transitional and Early Ranch style houses after 1935, and mostly after the war. 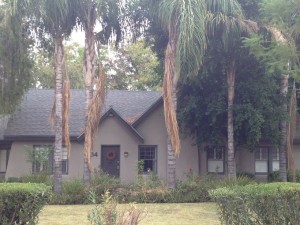 Two additional subdivisions were platted between the Medlock and Orangewood areas just before the war; South Orangewood (1937) and Aldrich Place (1939). They are mostly populated by Transitional and Early Ranch style homes. Their plans followed the precedent set by the earlier subdivisions with regard to street and lot layout.

The overall rural character of the district is brought forth through mature, dense plantings and broad, flood-irrigated lawns that are common. The rural character is further enhanced in the Medlock Place and South Medlock subdivisions by the large, spacious lots. Streets, while once graveled, have now all been paved with asphalt, although Medlock Place and South Medlock still have no curbs and gutters; these have been added in the other areas. 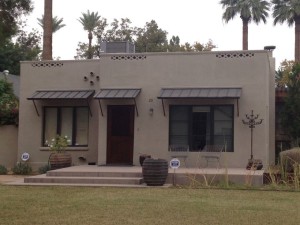 The Homes In Medlock Place

Homes in Medlock Place and South Medlock tend to be larger than the other areas, commensurate with the size of the lots. Second story additions occur occasionally; original two-story homes are rare. Homes generally have uniform setbacks providing a front yard (usually turf and landscaping) of 20 to 30 feet in depth. Home on corner lots frequently make use of both street frontages with secondary entrances or garages. Many of the homes have historic-era garages associated with them, usually of a similar or compatible design. 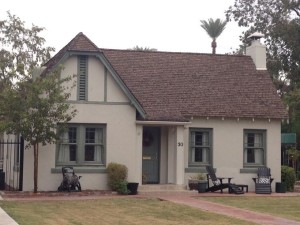 The overall condition of the properties in the neighborhood is good. Most homes are well-maintained. There has also been a trend toward major additions and remodeling for some of the properties.

Several historic-era homes, particularly in Medlock Place and South Medlock, have been modernized such that they no longer present their historic appearance. However, the majority of the homes are unaltered or have minor alterations such as window replacements, or in some cases exterior sheathing such as stucco applied over earlier brick.

The district is distinguished from its surroundings on all sides. The corridor along Central Avenue has been redeveloped with commercial uses, marking a clear delineation and difference in character. This is also true for the portion of the district abutting Camelback Road.

The area to the southwest of the district, south of Colter Avenue and west of Third Avenue, has modern development dominated by multi-family uses and a modern church. Seventh Avenue and Missouri Avenue also present clear limits, with single family homes west and north of these thoroughfares representing more recent development. The area north of Georgia Avenue and from Third Avenue east has a mixture of modern commercial and multi-family residential uses. Within the district, the predominantly residential character and continuity of streets enhances its overall unity.

The development of Medlock Place, located within the North-Central corridor of Phoenix, can be divided into two periods. Early development in the area encouraged the transformation of the desert into agricultural production.

Later, land developers sought to capitalize on the growing population of the Valley of the Sun by subdividing agricultural land into large semi-rural residential tracts. In the second developmental period, the increasing physical expansion of Phoenix encouraged the further subdivision of semi-agricultural holdings, and developers experimented with new advertising and marketing strategies.

Slowing During the Great Depression

During the Great Depression, development slowed, and federal programs increasingly influenced the style and method of construction in the Valley. After World War II, Phoenix redoubled development efforts to meet the growing demand for residential housing.

Floyd W. Medlock, a cotton broker living at 145 North 2nd Avenue, subdivided his portions of the Evan’s Addition to Orangewood-Medlock Place and South Medlock Place–in 1926 and 1927, respectively. While developing the lots for sale, he continued working as a cotton broker.

Medlock’s advertising extolled country living “delights” such as low taxes and “lots of elbow room,” while also advertising modern conveniences like fully electric kitchen appliances, electric light switches, and DuroPressure WaterSystems. A member of the Central Avenue Beautification Committee, Medlock planted seven-year old palms and shade trees along all of the gravel streets in the subdivision. Between Medlock Place’s opening in October 1926 and February 1927, Medlock constructed

Unlike previous building strategies used in the north-central corridor, Medlock sold pre-built homes, not vacant lots, and advertised the affordability, modernity, and quality (rather than exclusivity) of his homes.

By April of 1927, Medlock had invested over $70,000 in his building program, with much apparent success. He hired the mason R. L. Moore to construct the “semi-English” style brick homes, and had hardwood floors installed in all rooms except for the bathrooms, which were tiled. Medlock also constructed “Spanish style” homes ranging in price from $8,000 to $10,000. Medlock claimed to have the fastest-growing home district in Phoenix, selling thirteen homes in 1927.

Medlock diversified his development strategy in South Medlock Place, offering vacant lots for sale. He advertised the South Medlock lots at “less 5% for Cash-5% Discount if you Build Within 60 Days” and offered payment plans of $150 down and $25 a month for a lot. Within one week of opening the subdivision, he sold one-third of the lots, mostly ones on Pasadena Avenue with views of Camelback Mountain.

In 1928, Orangewood Estates developers W. D. Upshaw and L. R. Bailey capitalized on the proximity of Medlock’s success in their subdivision advertisements. Upshaw and Bailey also restricted a portion of their development for businesses now attracted to the residential expansion to the north.

The developers also appealed to young families, mentioning such recent coups as the nearby construction of Brophy College and a school bond financing a new grade school on Camelback Road. Orangewood Estates lots were available as large 1 1/4 acre or 2 1/2 acre lots, and platted so that each estate had a corner tract. The developers also recognized the investment potential of the area to buyers, emphasizing that the existing lots could be further subdivided into six or twelve city lots, thereby “doubling your money immediately.”

Orangewood Estates speculators did not have the immediate success that Medlock experienced. Rather, the large lots sold slowly, mostly going to local land speculators and for investment holdings. No houses were built in the area before the mid-1930’s.

The stock market crash in 1929 slowed, but did not halt what is now historic Phoenix’s neighborhood’s growth. Unlike cities in the industrial north and east, Phoenix’s strong agricultural economy, increasingly diversified business community, and status as the state government center kept the city alive, but still financially shaken. New Deal programs instituted in the 1930’s helped many people in need, and established government guidelines and procedures that endured through the twentieth century.

By the mid-1930’s, Phoenicians began the work of land development again, albeit slowly. Medlock Place continued its steady expansion, with Floyd Medlock building several more “economical” homes through 1934. The quick sales he had experienced in the late 1920’s had, however, passed.

Increasingly his speculative construction ventures remained vacant, as noted in City Directories. One of the few Orangewood Estates properties constructed on speculation remained vacant, and the 1938 City Directory noted that “transients” had taken up residence. By 1940, all but two of Floyd Medlock’s lots in Medlock Place and five in South Medlock Place had sold and were occupied.

In 1937, A. J. and Margaret Atwater, local laundry owners who also speculated in commercial real estate, recorded South Orangewood, previously a portion of the Evan’s Addition to Orangewood. Missouri Avenue and Colter Street bounded South Orangewood to the north and south, and Third Avenue was to the east. The west side of the subdivision abutted Orangewood Estates. In total, the Atwaters platted twenty-four lots, each lot averaging 73.5 by 135 feet. With a few exceptions in the late 1940s, almost all of the South Orangewood homes were built between 1937 and 1942.

Orangewood Realty Company recorded Aldrich Place in 1939. As with most construction in the area, growth was slow but steady before and during World War II. Orangewood Architect Jack Knapp designed the home at 128 W. Oregon (now 220 W. Oregon), which was completed in 1940. Other builders completed four other homes in the subdivision by 1944. Overall, South Orangewood, Orangewood Estates, and Aldrich Place saw little development until after the war.

Medlock Place Historic District history was changed by the post-war years. The scene was quieted significantly. Nationally, the marriage rate doubled after the war, but in 1948, over 2 million couples were still living with relatives. Veterans Administration loans coupled with Federal Housing Administration mortgage programs made the financing easy, but the demand for ready-to-live-in housing was immediate. Phoenix developers saw and met that need, consistently.

After the war, several builders were involved in South Orangewood, Orangewood Estates, and Aldrich Place home building, including Bob Dill and John Ramson. Dill lived in the house at 112 W. Oregon Avenue in 1948-49. Between 1945 and 1955 builders completed construction on almost all of the remaining lots in the Evan’s Addition subdivisions.