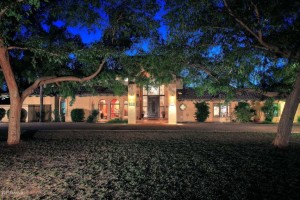 North Central Phoenix Corridor history begins with the development of the Central Avenue area in 1895 when William J. Murphy platted the Orangewood subdivision.

This two-square mile area bounded by what are now Northern Avenue and Bethany Home Road, between 7th Avenue and 7th Street, now simply referred to as North Central Phoenix Corridor, was promoted as the Orangewood Residential Village.

Murphy’s concept about Orangewood was to create a suburb of Phoenix “wherein might be established rural homes at an easy distance from the city.” He believed that the large lot size would attract upper income residents of Phoenix. From wealthy outside investors and immigrants who would utilize the lots to build large estate homes surrounded by citrus groves was his goal. 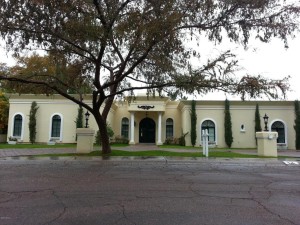 The subdivision was divided primarily into 20-acre size lots with Central Avenue extending through the property as the subdivision’s principal roadway.

Olive and ash trees were added along both sides of Central Avenue. Also, citrus trees from Southern California were planted on the interior portions to make the subdivision more attractive to new investors and homeowners.

The exclusivity of Orangewood was evident in that at the turn of the 19th century. So, the Central Arizona Driving Association arranged to have Central Avenue deeded as a “driving street” for property owners to drive their horse-drawn buggies. There was even a separate path on the east side of Central Avenue for horses and riders only.

Key Events in Development of the North Central Avenue Area:

The architectural diversity of North Central Avenue contrasts with the uniform architecture found in newer developments being built throughout the city. Central Avenue homes display a unique collection of architectural styles that use a wide range of building materials, textures and colors. Custom homes, some dating back to the early 1900’s, are interspersed throughout the area. These reflect the original owners’ personal styles, the building periods and development trends, or mimic architectural styles found in other parts of the country.

Central Avenue and the Murphy Bridle Path share in the history of the neighborhood and is listed in the City of Phoenix Historic Register. It’s also a Point of Pride for Phoenix. North Central Avenue has been a tree-lined street from the early days of providing an avenue for the Central Avenue Driving Club to today’s major arterial street from downtown Phoenix to the Sunnyslope area.

From Bethany Home to Northern Avenue, the street has four lanes of travel without a center turn lane. Rows of Olive and Ash trees line both sides of its right-of-way with the Murphy Bridle Path on the east, and a U.S. Bureau of Reclamation irrigation lateral on the west. The Salt River Project maintains the irrigation lateral. The pavement edges taper to the landscape edges on either side of the street, and there are no curbs or paved sidewalks in the right-of-way, except at street intersections.

The Murphy Bridle Path begins at Bethany Home Road and ends two-and-a-half miles north at the Arizona Canal. It is a well-graded pedestrian and bicycling trail approximately 10-feet wide, located between ash and olive trees.

Pavement intersects the trail only where streets and some driveways cross the path. Most adjacent property owners have not paved driveways across it in favor of keeping the path in a natural state. The bridle path has been a recreational path and landmark of North Central Phoenix for over 100 years.

The Olive trees (Olea europaea) that line Central Avenue are located outside of the public right-of-way on private property. These are the original trees planted by Murphy when the original Orangewood Subdivision was platted. They lend both a historic value and character to the neighborhood and were planted sometime between 1905-1910. (Note: There are only two varieties of almost pollenless and fruitless olive trees that can now be legally grown in Arizona: Olea europaea ‘Wilson’s Fruitless’ or Olea europaea’s ‘Swan Hill.’ Nurseries in Arizona are prohibited from growing or selling olive trees that produce pollen and bear fruit.)

The irrigation lateral, dating back to when Murphy first brought water to this area, remains an active lateral providing water to the irrigated residential lots in the North Central area. The lateral is located between the ash and olive trees, and in some locations it remains an open ditch with natural or concrete edges. Driveway bridges provide access to the residences in these areas.

In other sections along Central Avenue, the lateral has been piped and is not visible. In June 2002, valley-wide survey by SRP identified the Central Avenue lateral as one of the oldest irrigation laterals in the city. But, it was worthy of preservation. This was because of the historical context of where it is located as well as its public visibility, its condition, stable land uses surrounding it and other criteria.