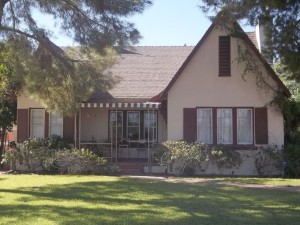 Despite being surrounded by modern commercial properties and in the shadow of nearby high-rise office buildings to the west, La Hacienda Historic District retains a high level of its early to mid-20th Century architectural character, and remains one of Phoenix’s small, yet prestigious residential neighborhoods.

The overall character of the district is emphasized by mature, dense plantings of trees which line the streets. There is a wide variety of mature vegetation including palms, eucalyptus, citrus, mesquite, and pine trees. 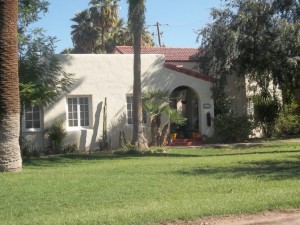 Retaining a high level of integrity in architecture and setting, the La Hacienda neighborhood appears today much as it did in the years preceding and following World War II.

While some of the neighborhood’s houses have undergone alterations, primarily additions, window replacements, and roofing substitutions, the majority are little changed from the time of their construction, and several are virtually unaltered. Where additions have occurred, they are mainly in the backyards and have little effect on the streetscape of the historic district.

The Absence of Pedestrian Sidewalks and Streetlights 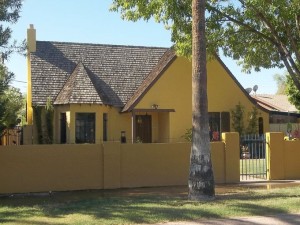 A Shared Sense of Community and Beliefs

These history makers shared many values and ideals in common and such feelings have a great impact on the shape and quality of a community, and on the City of Phoenix and the State of Arizona. The fact that the La Hacienda and Mayfair subdivisions merged to form a common identity is strong evidence for a shared sense of community and beliefs. 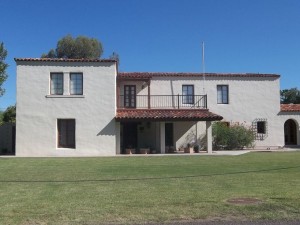 The efforts over the years of Janet Beauchamp, Jane Roper, Ruth Reinhold, and Grace Switzer to compile historical information on the neighborhood is proof of a strong sense of history and community by many residents of La Hacienda. This brief history of the people who lived in the La Hacienda neighborhood provides a sense of the magnitude and significance of the impact these residents had on the City of Phoenix before the 1960s which was the neighborhood’s most critical period of growth and when its community identity emerged. 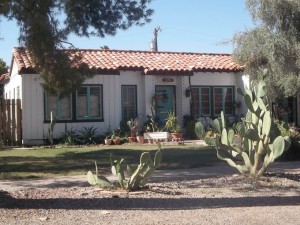 In the mid-1920’s, local developers Maurice Obear and his wife, Ruth Brown Obear, saw an opportunity to create an upscale community adjacent to the new location of the Phoenix Country Club. So, it had been moved to the northeast corner of Thomas Road and 7th Street in 1920.

The History of a New Subdivision

The new subdivision, La Hacienda, was made up of 23 lots, between 5th Street and 7th Street. An ad in the Sunday, February 6, 1927 Arizona Republican stated that “this elaborately planned subdivision [La Hacienda] faces the rapidly developing Country Club Place with its golf course, acknowledged to be the best 18-hole course in the Southwest.”

Maurice Obear wasted no time developing the first houses in the La Hacienda neighborhood, relying on the services of Chicago architect Herbert H. Green who specialized in houses of the Spanish Colonial and Monterey Revival styles. 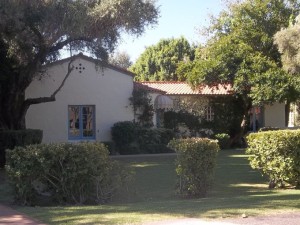 Architect Albert Chase McArthur was also involved in work on some of the houses in the La Hacienda subdivision. He created the plans for the house at 331 E. Verde, a house that Greene designed. McArthur also worked on the design of 367 E. Verde and possibly 381 E. Verde in the late 1920’s.

Given the continuity of design across the neighborhood, he likely was involved in the design and planning of other houses as well. Like Greene, McArthur originally came from Chicago, and was a student of Frank Lloyd Wright. McArthur is best known for the design of the Arizona Biltmore Hotel completed in 1929. 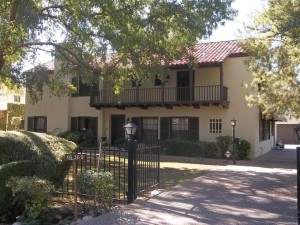 Obear took additional steps to insure that La Hacienda remained an exclusive property. As a condition of purchasing property in the subdivision, buyers were required to respect a formal, written agreement that listed six sets of restrictions.

In order to prevent the construction of unwanted commercial, public, or private structures, the agreement forbade tenants from building anything such as a “theater, hospital, sanitarium, hotel, school, apartment house and no stores, business buildings, or service stations.” (Obear and Obear 1926).

This clause was intended to prevent undesirable commercial and other encroachments that could devalue the properties in La Hacienda and lead to unwanted activities in the neighborhood.

Such ventures might also undermine the social cohesion and sense of community in the subdivision as it grew and deter potential buyers and residents.

Obear’s other restrictions included a minimum cost for all dwellings built in La Hacienda, which was $7,500, and that only one house could be constructed on a single lot. Although modest by today’s standards, $7,500 was a large sum of money in the late 1920s, a fact that effectively barred lower-income Phoenicians from purchasing houses in such subdivisions. 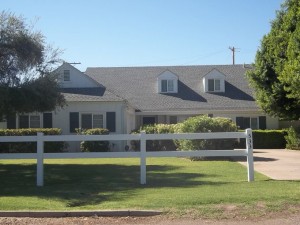 Contrary to Maurice and Ruth Obears’ original intent, all the lots facing Thomas Road and 7th Street became commercial properties, including 2930 N. 7th Street, which was converted into a lawyer’s office. This greatly reduced the size of the subdivision as it was platted in 1926.

In October 1928, John and Dorothy Bonds established the Mayfair subdivision, 48 lots between 3rd Street and 5th Street. Nearly all of the lots measured 50×126 ft, narrower than the La Hacienda lots, and most could not accommodate the larger-sized La Hacienda houses.

The Mayfair subdivision was not as exclusive as its adjoining neighbor to the east. John and Dorothy Bonds’ new subdivision was aimed more at upper middle-income families. Lot prices (without houses) ranged from $840 to $1,140 in December 1928, as opposed to La Hacienda where lots were advertised between $1,500 and $1,750 in February 1927. An advertisement in the December 2, 1928 Arizona Republican stressed that prices at Mayfair “Cannot be equaled.”

The residents of Mayfair moved there for many of the same reasons as their neighbors at La Hacienda. The same December 2 newspaper ad highlighted the proximity to La Hacienda and the Phoenix Country Club to the east, and touted its “Paved streets, cement sidewalks, and good water.”  An added benefit to residents of Mayfair was the streetcar line that ran up North 3rd Street, providing easy access to businesses, shopping, and jobs in downtown Phoenix.

La Hacienda Historic District history continues as one of the first houses in Mayfair was built in 1929 by Laing and Heenan. They were a construction firm in Phoenix that specialized in building “Pacific Ready-Cut” Homes. Pacific specialized in Revival style designs. Dr. Matanovich, owner of this house, chose a Spanish Colonial Revival model.

A brief article in the November 3, 1929 Arizona Republican stated that the doctor’s house, “Designed along the lines of buildings on the Dalmatian coast … makes a handsome addition to the fine homes in this exclusive residential district.”

Even at this time, outward similarities were evident between Mayfair and La Hacienda. Construction of elegant Period Revival houses in the 1920’s and 1930’s dominated the two streetscapes. Despite its late start in relation to La Hacienda, house construction at Mayfair progressed rapidly during the early 1930’s.

Like La Hacienda, a substantial number of lots in Mayfair were eventually rezoned for commercial use. Those rezoned face East Thomas Road, along the southern edge of the subdivision. This commercial development encompassed approximately one quarter of the land originally platted for Mayfair in 1928.

Despite their proximity, there were differences between these tracts. The most obvious differences are in the size of the lots and the relative economic levels of the residents, although both were considered to be exclusive subdivisions.

A Merging of Two Subdivisions

At least one resident recalls that a wire fence separated the subdivisions along 5th Street at some point in their histories. In time, the distinctions between these two subdivisions all but disappeared. They are now considered to be a single neighborhood by the current residents and the City of Phoenix. It is certainly possible that efforts to limit the commercial rezoning of lots within both Mayfair and La Hacienda helped to create a common sense of community.

Many of the residents of the La Hacienda neighborhoods shared similar career interests. Professions such as doctors, lawyers, businessmen, financial specialists, and politicians are prominent. Of course, many of these same professionals were also members of the Phoenix Country Club. The affiliation with this organization helped to create bonds between numerous community members and leaders in the La Hacienda neighborhood.