The Encanto Manor Historic District history in Phoenix begins in 1888 when James W. Dorris, a successful retail and wholesale grocer purchased an interest in a small confectionery store in 1888.

Encanto Manor is a suburban neighborhood located about two miles north/northwest of downtown Phoenix. It sits along the northern edge of Encanto Park Golf Course. 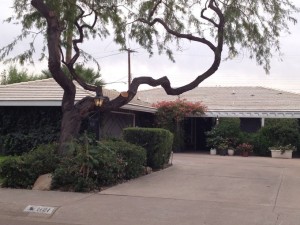 Encanto Manor in Phoenix, Arizona, was part of a suburban estate developed by James W. Dorris, a successful retail and wholesale grocer. Dorris came to Phoenix and purchased an interest in a small confectionery store in 1888. His business increased steadily and by 1892, he established a grocery at the southwest corner of First and Washington streets, It was said to be the finest and largest grocery store in the city and covered two floors and a large storage room (Arline, A). He expanded into the wholesale market and his business continued to increase. 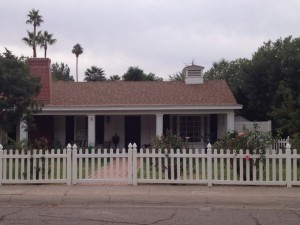 In 1907, Dorris’ success allowed him to purchase a half-section (320 acres) of land bounded by 7th and 15th Avenues and McDowell and Thomas Roads. In 1911, Dorris hired a California architectural firm, Fitzhugh and Fitzhugh, to design a large Mission Revival style house accessed from 7th Avenue (2712 N. 7th Avenue) by a circular drive. His family moved into the house in 1912. 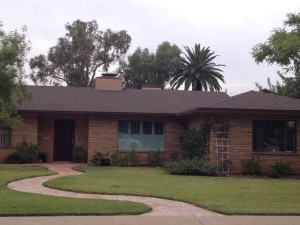 Dorris announced plans to subdivide the entire 320-acre “J. W. Dorris Addition” to include a hotel and 18-hole golf course. The ambitious project failed to materialize but Dorris began selling off smaller parcels in a piecemeal fashion with strict stipulations about the nature of development to take place.

Subdivisions cut from the Dorris tract became among the most prestigious addresses in Phoenix. They included the Palmcroft and Encanto subdivisions. In 1934, Dorris sold more than 100 acres to the city of Phoenix for Encanto Park and the first nine holes of the Encanto Golf Course (Phoenix Gazette, Section B). A strip along 7th Avenue was subdivided as Encanto Vista shortly before his death in 1943 (Arizona State Historic Property Inventory).

By 1945, the Dorris’ House, known as Casa de Rosas, lay on a 2 ½ acre parcel sold to the Congregational Conference of Southern California and the Southwest. Services for the Encanto Community Church were held in the house and the minister and his family lived in the upstairs before the carriage house was renovated for their use.

At the same time, the church sold land to the west of the house to Delbert L. Stapley who subdivided it for houses on Edgemont and Windsor. In 1950-51, the church built a new sanctuary just south of the Dorris House which now serves as a community center for the congregation (Arline, B). Both the Dorris House and the church lie in the Encanto Manor Historic District. 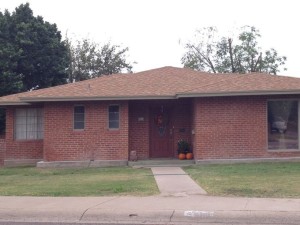 At the same time, John H. Lester and L.M. Hamman platted the Encanto Manor subdivision after years of wrangling with the city. Lester and Hamman purchased the land for $25,000 from the estate of James W. Dorris, who originally planned to subdivide it himself. Lester and Hamman initially offered to sell the land to the city for $35,000, but the city declined.

When public outcry and demand led the city to agree to the deal, the purchase price had increased so dramatically that a condemnation suit was filed. The jury in the suit set the purchase price at $60,000, a price the city was still unwilling to pay. After World War II, Lester and Hamman subdivided Encanto Manor into a 79-lot single-family residential subdivision that accounts for most of the district (Weight, January 11, 2006). 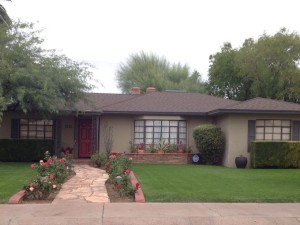 Advertisements for Encanto Manor touted the subdivision’s “luxurious living” and that it was “just a putt” away from the golf course. Although all houses in Encanto Manor are near the golf course, only those along the south side of Edgemont were afforded golf course views, increasing the exclusivity of this street.

Postwar houses in the Encanto Manor Historic District are all variations on the then-fashionable Ranch style which dominated residential design after World War II. Encanto Manor’s Ranch style houses are all one-story, a hallmark of the design.

Most feature hipped roofs and steel casement windows. Therefore, virtually all of the historic district’s houses are masonry and more than two-thirds are rendered in brick with the rest constructed of painted or stuccoed block.

Variations on the Ranch style found in the district include French Provincial, as typified by the Carson House at 1320 W. Edgemont Avenue, American Colonial, on the Divelbess House at 855 W. Edgemont Avenue, and Transitional Ranch, such as the Hensley House at 1321 W. Thomas Road. Brick patterns and tile roof ridge caps are common ornamental features found in Encanto Manor.

Exceptions of Variations of Home Styles

Homes Built in Encanto Manor After 1950

Encanto Manor Historic District history continues during that brief time where 69 resources were used, including the church that was completed. An additional 13 houses were constructed between 1951 and 1960. Only two houses were constructed after the period of significance, and both follow Ranch style traditions. With the exception of the Dorris House, all construction occurred within a thirty-year period of time.

The district has been well maintained in the ensuing decades and none of the houses have been demolished. Generally, alterations have generally been limited to window, porch post, and roofing material replacements, enclosure of carports, and the application of paint or stucco on masonry walls. The district retains a high level of integrity with 85% of resources contributing to the historic character of the neighborhood.