The History of Encanto Vista Historic District in Phoenix, Arizona

The History of Encanto Vista Historic District is quite extraordinary and set the tone for much of the surrounding developments. The Encanto Vista land was part of a 320-acre tract of agricultural land purchased by Phoenix merchant James W Dorris just after the turn of the 20th century. Dorris built his home on the tract which was then outside the city limits.

His house on North 7th Avenue still survives. As the city grew out to meet him, Dorris sold different parcels for residential development. Among them were the prestigious Encanto Palmcroft and Encanto subdivisions to the south of Encanto Vista.

In 1943, Dorris sold most of his remaining property to the Hamman Lumber Company with the caveat that they build a high class development, a condition that he had placed on his earlier ventures (Weight, March 3, 2003). By insisting on restrictive covenants and minimum lot prices, Dorris virtually guaranteed that these subdivisions would attract only well-to-do residents.

Since his own home lay immediately north of Encanto Vista, he also ensured that his neighbors would be of his social and economic class. Dorris’s measures laid the groundwork for Encanto Vista as a Picturesque Neighborhood (1911-1955) whose appeal lay in its exclusivity and aesthetic qualities. 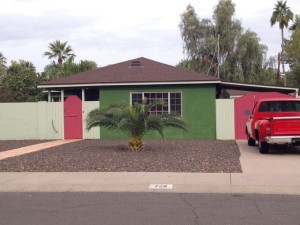 Platting of the Neighborhood

When the Hamman Lumber Company filed a plat for Encanto Vista in 1943, they knew they wouldn’t be able to build until after the war due to restrictions on “non-essential” housing. Nevertheless, the property was an attractive tract that promised success in the postwar period.

To the south, is the upscale Palmcroft and Encanto subdivisions. And, to the west is Encanto Park, a city park acquired from Dorris in 1937. The 100-acre Encanto Park featured an island lagoon, lush vegetation, a clubhouse, and two golf courses (Weight, March 3, 2003), one of which bordered the Encanto Vista site. The high tone of the Encanto neighborhood and the park amenities would prove enticing to home buyers. 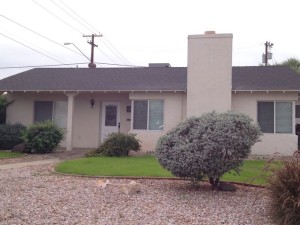 Since it was already platted in 1943, Encanto Vista was ready for construction when restrictions were lifted at the end of the war. Construction commenced immediately with the first homes completed in 1946. By 1949, seventy-two percent of the lots were built out with another fifteen percent holding building permits.

The subdivision was nearly complete by 1951 with a few later houses constructed between 1958 and 1959. Among the more than fifty builders who constructed homes in the district were Alfred Anderson, Del Webb, Sam Hoffman, and Clarence Crittenden. Many of the houses were architect-designed. Among those who contributed to Encanto Vista were Peter Hauskens, David Shoulder, and Frederick P. Weaver. 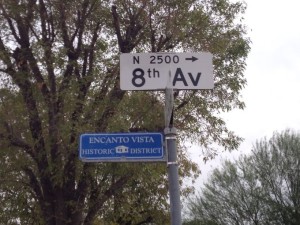 A Picturesque Neighborhood in the tradition of Encanto Manor, Los Olivos, and Encanto-Palmcroft, Encanto Vista was well-planned to benefit from the attractive green space of Encanto Golf Course.

Streets were designed in an unusual repeating horseshoe pattern to provide views to the greatest number of residents, achieving a park-like setting for its custom and semi-custom homes.

Houses and lots are large. These homes average 1900 square feet and lots average one-fifth of an acre. A sense of cohesiveness was achieved through standard sized houses and lots and setbacks of 30 feet.

Unity was further gained by the use of similar building materials such as brick, block, asphalt shingles, and casement windows (Weight, March 3, 2003). In contrast, many different architects and builders contributed to Encanto Vista’s housing stock, adding variety to the predominant Ranch style. They included glass block, bullseye windows, varied wall patterns, bay and corner casement windows to create variety and texture in an otherwise uniform setting. 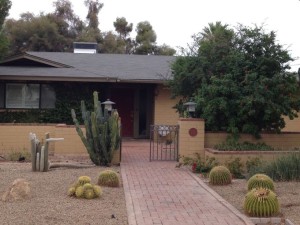 Development in Encanto Vista represents the transition between pre-war construction trends, in which many different contractors built individual homes for specific clients, and later postwar patterns, in which developers built large tracts of similarly designed houses on speculation.

Following pre-war tradition, many different builders and architects contributed to Encanto Vista’s development, a fact that resulted in a variety of design motifs and materials.

On the other hand, the district embraced new concepts in subdivision development and was laid out on similarly sized and shaped lots with one-story masonry houses. Though individual houses possessed unique attributes, nearly all were variations on the modern Ranch style. Also, like many of the new postwar neighborhoods, nearly one-fourth of Encanto Vista’s homes were built on speculation. 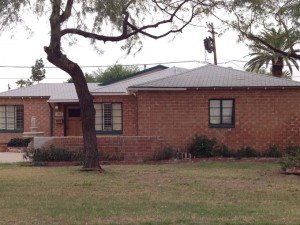 All of these factors further illustrate Encanto Vista’s upscale characteristics.

A major selling point for Encanto Vista was its location near a major public park and golf course. Encanto Vista’s streets, with their east-west horseshoe plan, were laid out to allow views of the golf course. No house was more than a block from the green space. And, it is very close to Encanto Palmcroft Historic District.

One real estate agent advertised a house in the subdivision as being only half a block to the eighth tee of the Encanto Golf Course. Nearby Encanto Park was also a selling point to young families with children.

Encanto Vista Historic District History in the making continues. After the austerity of the Great Depression and the war years, many would-be householders longed for a new start and eschewed older used homes and neighborhoods. Encanto Vista offered a fresh, new neighborhood with modern houses built in the fashionable Ranch style.

Homes are all Variations of the Ranch Style

Houses in the Encanto Vista Historic District are all variations of the Ranch style which dominated residential design after World War II. Encanto Vista’s Ranch style houses are all one story, a hallmark of the design. Most feature hipped roofs and steel casement windows.

Virtually all of the district’s houses are masonry with more than two-thirds rendered in brick with the rest constructed of painted or stuccoed block. Brick patterns and tile roof ridge caps are common ornamental features found in Encanto Vista.