Cheery Lynn Historic District History in Phoenix has origins beginning in 1887. These homes are all unique with 1920s & 1930s English Tudors and Cottages.

Advertising begins by stating: “You will find the tract on the west side of Sixteenth Street one and one-quarter miles north of McDowell Road. Just three miles north of the post office, in walking distance from golf links and Country club. There are two model homes on the tract, awaiting your inspection beautiful homes. There is an abundance of good water. The lots have a 60-foot frontage and can be bought for easy terms. Watch for the opening announcement!”

“DRIVE OUT TO CHEERY LYNN TODAY” 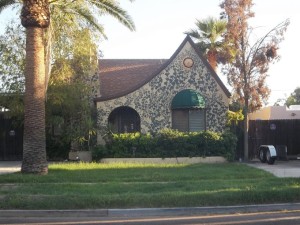 And drive they did … In Studebakers, Packard’s, and Nash’s. In 1928, Hoover won the White House, Earhart flew across the Atlantic, and Phoenix was in the midst of a building boom. The Cheery Lynn subdivision was one of several new neighborhoods brought to market. Its call to buyers drive out today heralded a new phase in the physical expansion of the growing city.

Cheery Lynn historic district history continues to build. Two generations earlier, in 1867, Phoenix was born as a dusty supply outpost serving Camp McDowell to the northeast. Inspired by the traces of ancient Hohokam canals, speculators sensed the potential for a fertile Salt River Valley. The canals were reconstructed, irrigation spawned agriculture, and settlers began to arrive. By 1870, a township had been planned and platted in square mile grids just north of the Salt River flood plain.

As the population grew, the lands to the south were devoted to agriculture, and the town expanded north toward its only natural boundary, the Cave Creek ash. Selected as the territorial capital in 1889, the city added the business of government to its economic mix. By the turn of the century, Phoenix had developed into a small but flourishing urban center. The production of cotton and citrus fueled growth in the commerce of marketing and distribution. The majority of Phoenix land now was controlled by a small number of speculators anticipating agricultural and residential development.

The Passage of the National Reclamation Act of 1902

Though the rejuvenated canals brought life giving water to the Valley, stable growth required more than the seasonal flows the Salt River could provide. Landowners pressed for governmental action on water control projects of a massive scale. Their efforts were rewarded with the passage of the National Reclamation Act of 1902. The Act enabled legislation that led to construction of Roosevelt Dam in 1911, ensuing a stable supply of water for the Valley.

With the granting of statehood in 1912, the elements were now in place for an explosion of growth. The population of Phoenix doubled during each of the first three decades of the 20th century. In 1923, construction of the Cave Creek Dam stemmed persistent floods of water, spawning new construction along the city’s north-west side. The northward march continued, and growth and technology soon would couple to change the face of Phoenix

On the Road to The Biltmore

From its origins in 1887, the Phoenix Street Railway Company was the main transportation system for the city, early track lines radiated from downtown north to the Phoenix Indian School and north west to the State Fairgrounds. Subsequent lines paralleled Central Avenue north along second and Fifth avenues, providing transportation to the emerging “suburbs.”

The correlation of streetcar lines and subdivisions was not a chance occurrence. The proximity of transportation was key to the promotion of residential developments. Eager to enhance their property values, real estate owners and investors financed the construction of extensions to the major lines. By the late 1920s, however, the automobile was beginning to influence the location of new neighborhoods. The dependence on the streetcar was over.

Ownership of automobiles was now widespread, and neighborhoods no longer need be tied to rail lines. Services, amenities and marketing now determined the success of residential development. Cheery Lynn was promoted as ultra modern, progressive, and indicative of the decline of streetcars, heralded as on the road to the new Arizona Biltmore. Subdivided by William Fosburg, the project contained 89 lots, 60 feet wide along 60-foot streets. While early Phoenix developments had concentrated on the sale of lots, Cheery Lynn represented the newest trend of packaging completed homes in a neighborhood stamped with a defined character and identity.

On January 28, 1928, a tract of land described as Lot 1 Beverly Heights was subdivided under the name of Cheery Lynn. Bounded by 16th Street on the east and Earll Drive on the south, the project was three miles from downtown, somewhat isolated from “in-town” neighborhoods, and a dramatic departure from development patterns of the past.

Back to the Future

Fosburg and his designer and superintendent of construction, Marion E. Carr, conceived Cheery Lynn as a neighborhood of “…English type homes…of the very latest designs.” Responding to the architectural trends of the time, the homes were of English Tudor and English Cottage Styles. Compact, with rectangular and L-shaped plans, these styles are usually single story, brick homes that feature massive chimneys, half-timbering and gabled roofs, which vary from the medium pitch of the English Cottage Style to the very steeply gabled English Tudor.

Fourteen Tudor Revival homes were constructed in Cheery Lynn in 1928. This early construction, when teamed with subsequent styles, has left Cheery Lynn with its most striking feature a dramatic interplay of the angles and pitches displayed by the roofs of competing architectural styles.

The rapid success of Cheery Lynn was a testament to Fosburg’ s keen timing and marketing savvy. He successfully packaged financing, neighborhood amenities, and architectural design. The development capitalized on the popular Period Revival styles and captured the peak of Phoenix prosperity in the late 1920’s.

In 1932, in response to the advance of the Depression into Phoenix, Fosburg engineered a trade of his Cheery Lynn properties with Peoria cotton ranch owner, H.M. Strough. A former builder in the Los Angeles area, Strough appeared enthusiastic about the Phoenix housing market and put his talent as a builder to work in Cheery Lynn.

While the effects of the Great Depression were slow to arrive in Phoenix, like the rest of the country, the Valley eventually succumbed. Though his trade of land was poorly timed, Strough remained undaunted and began to fashion his own success in Cheery Lynn through resourcefulness and ingenuity.

Teaming with the O’Malley Building Materials Company, Strough worked his way through the Depression one house at a time. Sustained by advances of materials and money from O’Malley, Strough would construct a single home, while housing his family in the structure’s garage. After a few months, construction of another new house would commence. The Strough family would move its residence to each new structure as the cycle continued. Using proceeds from rental and sales to repay O’Malley, Strough eventually would construct 23 homes within Cheery Lynn until his death in 1938.

Under Strough’ s influence, Cheery Lynn blossomed with an abundance of parapets, stucco, and red clay tile. Trips to California kept Strough abreast of the latest trends in architectural styling. Monterey and other Spanish Revivals had eclipsed the English styles, and Stough’ s transplant of the Monterey look would provide Cheery Lynn with its most dominant style. Constructed primarily of block, a typical home featured low walls and wing walls, some forming courtyards; vigas (wood beams)arches; and rooflines highlighted by red tile.

The Imprint of Uncle Sam

As the Depression persisted, the federal government began to play a dominant role in the construction of homes throughout the country. Congress enacted the National Housing Act of 1934 to stimulate industry, provide employment, and improve both nationwide housing standards and conditions with respect to home mortgage financing.

Fueled by the loan insurance programs of the Federal Housing Administration (FHA), home construction took on a new vitality. With the loans came regulation and standards that once again changed the look of construction. Lavish Period Revivals gave way to more muted forms. Diversity was replaced by uniformity and consistency. Floor plans were simplified, material was standardized, and ornamentation reduced to a minimum.

The Evolution of Period Revivals to Ranch Homes

Period styles gradually evolved into the Transitional and Early Ranch Styles, simple structures characterized by an L-shaped pan, low-pitched gable or hip roof, and columned porch at the entry. While a small number of these homes were constructed in Cheery Lynn prior to World War II, the majority of the subdivision’s post-War homes were modest versions of the French Provincial Ranch Style, which became the quintessential style of the Post-War West.

Cheery Lynn Historic District history, bearing witness to the past, the neighborhood today reflects and preserves the history of the city’s development. Water, politics, technology, and ingenuity all combined to create this unique enclave of homes at the northern edge of the city’s surging residential core. Historic designation of the district has focused added attention on the value of preserving such an asset and will ensure the future of Cheery Lynn Historic into the new century.

Homes For Sale In Cheery Lynn