The History of East Evergreen Historic District In Phoenix, Arizona

East Evergreen Historic District history began being largely developed as a Streetcar Subdivision (1887-1925). In the late 19th and early 20th centuries, land owners beyond the city limits enticed streetcar companies to build lines to their new additions in an effort to promote sales. Developers typically subdivided their land in a grid pattern of perpendicular streets and rectangular blocks that yielded the maximum number of deep, narrow lots within walking distance of the nearest streetcar stop. 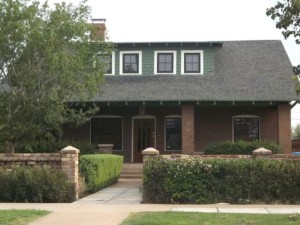 Development in East Evergreen can be directly attributed to the extension of the streetcar line north of the city along Third Street to the Phoenix Indian School in 1909.

In the same year, the East Evergreen Addition to the city of Phoenix was platted so that no house lay more than a few blocks from the streetcar stop at 3rd St. & McDowell Rd. However, ready access to reliable transportation inspired growth in the district and within a few years.

Numerous houses, most of them exhibiting Craftsman stylistic qualities, appeared on the district’s main streets of Willetta, Lynwood and 5th Street. In addition to East Evergreen, the Garfield, North Garfield, Coronado, and Kenilworth districts are examples of late 19th and early 20th century streetcar subdivisions.

The East Evergreen Historic District streetscape is characterized by large front yard setbacks, mature palm tree-lined streets and pedestrian-friendly sidewalks. Despite minor variations in the size of lots and setbacks, the district retains this common character. There are two basic lot sizes in East Evergreen. Lots along Willetta Street are approximately 70’ wide by 225’ deep, which was the historic neighborhood standard. Between 1915 and 1918, Lynwood Street was cut through a section of a preexisting larger block.

Lots along Lynwood are approximately 65’ wide x 50’ deep, dramatically smaller than those along Willetta Street. Because most of the reduction came from the rear yard, the Lynwood Street lots appear similar in size and setback from the street.

The largest lot in the district is found at 1422 N 5th St. Originally, the large, deep lot held one of the oldest and most substantial single family houses in the neighborhood. It appeared on both the 1915 and 1949 Sanborn maps and was replaced with the present apartment complex about 1965.

What You’ll Find In an East Evergreen Historic Home

Most residences in the district are 1-1 1/2  stories. Almost all the residences have front porches, most of which span the width of the facade. The square footage ranges from 900 to 3,500 square feet. The features are stunning often with French doors, hardwood floors, original built-ins and wood trim.

Landscaping and street furniture further contribute to the character of the district. Mature palm trees line the streets. These are regularly spaced approximately 35 feet apart, in the area between the sidewalk and Willetta Street and around Townsend Park. Some mature palm trees are present on 5th Street and Lynwood Street, but not with the same regularity. Many lots have broad front lawns. Lampposts are located both at street corners, on residential blocks between the street and sidewalk, and throughout the park. The lamp posts are replicas of historic lamp posts.

Perhaps Willetta’s success inspired the developers to open Lynwood Street between 1915 and 1918 where all of the extant residences along Lynwood were constructed by 1929. Willetta and Lynwood streets are the most uniform in house size, age, type, materials, rhythm and style.

Fifth Street features a mix of older and newer resources and different types of housing; it has two 1949 duplexes, a 1945 Early Ranch style house, and a large, c. 1965 apartment complex.

Victorian, Craftsman and Ranch styles are all present within the East Evergreen Historic District although Craftsman influences dominate the streetscapes. All have medium-pitched gable roofs, in front-gabled, side-gabled, and cross-gabled configurations. Nearly half of these residences feature dormers with either a pitched or shed roof. Most have the exposed rafters typical of the Craftsman style.