Bill Gates buys 25,000 acres of land to build the ‘smart city of the future’ in Arizona designed around self-driving cars and high-speed data networks 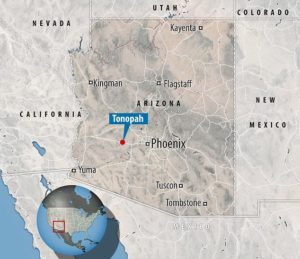 Bill Gates has bought $80 million worth of arid desert in Tonopah, Arizona, just outside of Downtown Phoenix, to build a new ‘smart city’.

The planned community, known as Belmont, will be designed around cutting-edge technology, including self-driving cars and high-speed data networks.

While few people currently live in the area, the plans call for as many as 80,000 homes and 3,800 acres of industrial, office and retail space.

The site will include 3,400 acres of open space and 470 acres for public schools, according to Arizona-based Belmont Partners, the real estate developer behind the project.

The firm, which forms part of a group controlled by Cascade Investment LLC, an investment firm run by Gates – said the goal is to turn the area into a ‘smart city’.

If you’re interested in buying a home in or near any Phoenix neighborhood or even specifically in Tonopah, you should contact Laura Boyajian, Licensed Real Estate Agent at 602.400.0008.