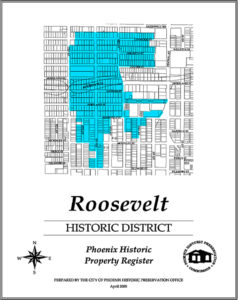 Roosevelt is just the place to be. If you like to drive the historic Phoenix neighborhoods looking for homes with age and character, you’ve undoubtedly discovered Roosevelt Historic District as it’s one of the most coveted historic districts in all of downtown Phoenix.

Probably people’s most favorite features of homes in Roosevelt, including my own, are the sprawling wrap-around front porches. They are inviting as can be and just bring you back to the old days!

With plenty of room for a hammock or a swing, you’ll never be at a loss just chilling out or entertaining. Watching kids play, people walking their dogs, entertaining your guests or just have a quiet night on the front porch with your favorite bottle of wine, like the good old fashioned days. This exquisite neighborhood and its homes take you back in time. If you’re from the Midwest or the East coast, you’ll feel right at home.

A mix of very fine architectural influences and some of the best examples of early twentieth century architecture exist in Roosevelt Historic District. This makes this neighborhood highly desirable. The homes are predominantly California Bungalows combined with Craftsman Bungalows, English Cottages and Period Revival style single-family homes.  The lots are narrow but deep and are the norm in Roosevelt. You’ll also find simplified versions of Queen Anne and Neoclassical houses, Prairie School buildings and Mission Revival style.

Inside, the homes vary in size ranging from roughly 1700 to more than 3000 square feet with a minimum of 3 to 4 bedrooms and multiple bathrooms. Sizable guest houses are definitely not uncommon. Quite often, large attics can be converted into living space if it hasn’t already been done. Many newer renovated apartments and new lofts have sprouted up over the years as the popularity and demand for this area has skyrocketed.

You can walk to the Comerica Theatre or Puppet Theatre or catch the light rail and go to a Diamondbacks ballgame at Chase Field. If the kids need a book to read over summer break, the Burton Barr Library is right there on Central.  Take a stroll with your 4-legged friends or significant other with dog needs a change of scene, walk her to the linear Margaret Hance Deck Park that covers much of the I-10 traffic traveling through a tunnel below.

An Endless Array of Local Fun

From the Roosevelt district, there are an endless array of local things to do, places to go and people to see! For starters, walk to the light rail, Public Market or Farmers’ Market (A local Farmers’ Market which was recently ranked one of the best in the country), walk to many popular restaurants, to work if you work in any of the corporations that call downtown Phoenix home.

The Historic Roosevelt Neighborhood is a modern name for a series of neighborhoods that grew north of the city between 1893 and 1930. Roosevelt Historic District is one of Phoenix’s original neighborhoods with its large homes built for the early elite dating back to the turn of the century.

Prominent Residents, Then and Now

High-ranking politicians, Supreme Court Justices, Physicians, Attorney’s and various entrepreneurs live in Roosevelt. Among some the prominent early residents of the neighborhood, though their houses are no longer standing, include Baron Goldwater, father of future Senator Barry Goldwater; Carl Hayden, Arizona’s first Congressman and Richard Sloan, Arizona’s territorial governor who lived in Roosevelt from 1909 to 1912.

In fact, today, there are countless numbers of historic Roosevelt homes turned lawfirm (where proper zoning is allowed) along some of the major streets in the neighborhood. The demand for these homes is high but are now very difficult to come by. Its not impossible, but they do come at a premium.

Roosevelt Row Artist’s Districts is all about culture and art in downtown Phoenix beginning at 7th Avenue and extends east to 16th Street. On the north side it begins at Interstate 10 and extends south to Fillmore Street. Additionally, It’s nationally known for its arts and cultural events, award-winning restaurants, galleries, boutiques and live music and is also home to artist live and work, gallery and studio spaces.

It’s a dynamic, walkable urban mixed-use area with a significant concentration of artists and other creative professionals. With increasing density, this is an area that has become more pedestrian-friendly and supportive of small local independent businesses that give downtown Phoenix character. Urban renewal is being heavily fostered  with rehabilitated bungalows and new infill projects.

Roosevelt Row and First Friday’s Art WalkDowntown Phoenix hosts one of the nation’s largest, self guided artwalks.  Roosevelt Row serves as a central hub for the monthly artwalk every First Friday from 6 to 11pm. Tour galleries, venues and art-related spaces to see a variety of artwork and to enjoy the spirit and culture of the city as you mingle with thousands of other residents and visitors.  Free event shuttles are available through out downtown and are headquartered at the Phoenix Art Museum.

The Roosevelt Action Association (RAA) is a wonderful group of residents whose focus is “promoting rehabilitation and redevelopment efforts and acting as a community advocate for issues that maintain the communities quality of life.” Yes, major pride of ownership and for good reason.

The Roosevelt Corridor is continuously and consistently re-emerging as one of the most dynamic areas in downtown Phoenix and is a valued cultural resource in the metropolitan region and the state.

Can’t Find What You’re Looking For in Roosevelt?

If you like the homes in Roosevelt, you’ll probably like the F.Q. Story, Willo and Alvarado historic districts. 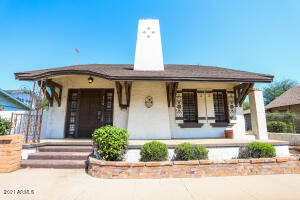 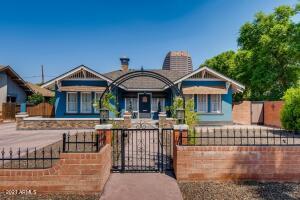 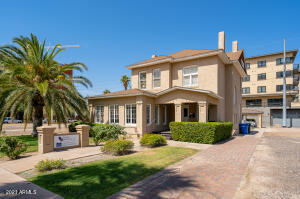 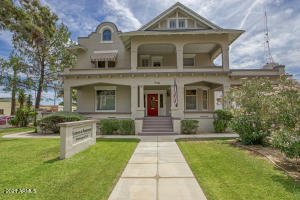 Read the History of Roosevelt Neighborhood

Schools in and around Roosevelt Historic District