The History of East Alvarado Historic District In Phoenix, Arizona

The History of East Alvarado Historic District evolved from the accumulated forces of nature, politics, and the dreams of strong-willed individuals.

A Stretch of Time In a Small Area 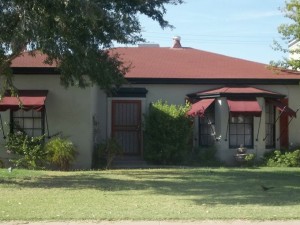 East Alvarado Historic District History evolves from near the central core of Phoenix which lies a quiet stretch of pavement less than one-quarter mile in length.

Within that quarter-mile, a collection of 30 homes comprise the compact neighborhood called East Alvarado, a neighborhood whose evolution traces the history of Phoenix and illustrates a pivotal phase in the development of both the Valley and the nation.

Located on East Alvarado Road, between 3rd and 7th Street, the East Alvarado District evolved from the accumulated forces of nature, politics, and the dreams of strong-willed individuals. These folks traced their roots to the earliest days of the city and beyond. 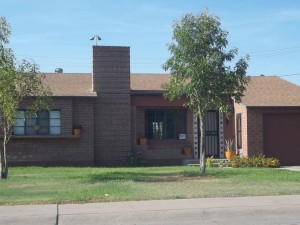 Up From The Ashes

Befitting the mythic origins of its name, the city of Phoenix rose from the ashes of an ancient culture. A people called the HoHoKam are thought to have occupied the Salt River Valley as early as the third century B. C.

As a result, they thrived in this desert setting by constructing a sophisticated system of canals to deliver the waters of the Salt River throughout the Valley, providing irrigation for the staples of their diet corn, beans and squash. Although the HoHoKam would vanish from the Valley in the 15th century, the canal system remained lying dormant for the next 400 years.

The Birth of Downtown Phoenix and Jack Swilling

In 1865, the U.S. Army established Camp McDowell, twenty miles north east of the Valley. So, the resulting demand for supplies drew attention to the river below where a man named Jack Swilling uncovered the ingenious canals of the Hohokam. He was described as equal parts soldier, deserter, prospector and promoter. Swilling formed a business that began to revitalize the waterways and cultivate land along the north bank of the Salt River. His activities drew additional settlers, giving birth, in 1870 to the town of Phoenix. 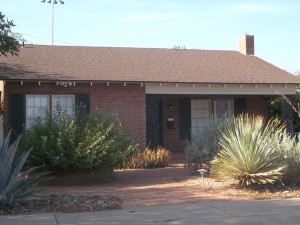 As the waters granted Phoenix life, they also checked its early growth and form. The seasonality of the river flows saved the city from the frenzied fluctuations of the western boom town syndrome. Instead, nurturing a paced and steady rise was the plan.

Unfortunately, a drought would curb rapid accelerations in growth. Then, alternating floods along the Salt River gave a northward push to development as residents abandoned low-lying areas, moving north along the square-mile grids established at eh city’s founding.

Center Street, now Central Avenue, became the major north-south thoroughfare, thriving with commercial and residential development. On the eve of the 20th century, the future site of East Alvarado was still two miles north of the city’s center. 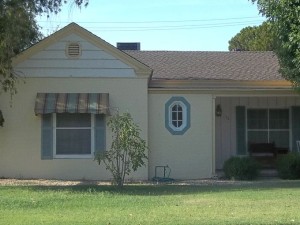 By the late 19th century, the components were assembled to pave the way for dramatic growth in the Valley.

Opening of the Arizona Grand Canal

In 1885, the opening of the Arizona Canal brought irrigation to an additional 100,000 acres of desert land. In 1888, the railroad came to Phoenix. And in 1889, the city was selected as the Territorial Capital. All the while, demand for agricultural products was on the rise.

The population of Phoenix tripled between 1885 and 1890. But the alternating plagues of floods and droughts persisted. It became evident that to provide for continued, stable growth the waters of the Salt River must be tamed. 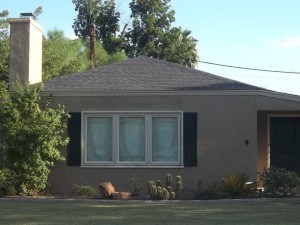 In 1895, Dwight B. Heard arrived in Phoenix. A young assistant credit manager with a Chicago hardware firm, Heard was forced to make the move because of weakened health. A seemingly unlikely candidate to pioneer the rugged deserts, Heard was in fact from solid stock. His ancestors were among the hardy lot to colonize 17th century New England. With equal vigor, Heard took to the 19th century West.

By 1897, Heard had established an investment company and was actively engaged in raising crops and cattle. His business activities quickly revealed the limitations of the fickle waters of the Salt River.

Heard became an active force in promoting federal efforts to control water in the desert. His tireless efforts were rewarded with passage of the 1902 National Reclamation Act. The Act provided needed funds for construction of the Roosevelt Dam which, when completed in 1911, stabilized the Valley’s water supply and provided a platform for unparalleled agricultural expansion and economic growth. 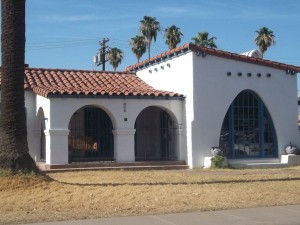 In 1903, anticipating the prosperity his political efforts would bring Heard and his wife Maie, ventured north along Central Avenue and constructed a 6,000-square-foot Spanish Colonial Revival mansion at the corner of Monte Vista and Central.

The home, named “Casa Blanca” would become the anchor for an entire quarter section of land that Heard subdivided in 1909 Ranging from Central Avenue to Seventh Street and McDowell Road to Oak Street.

Heard called his new subdivision “Los Olivos” and divided the 160 acres into 32 parcels of five acres each. Originally intended for upscale, estate size homes, the project was ahead of its time. However, the market demanded smaller home-sites, and Los Olivos was resurveyed and re-platted numerous times between 1909 and 1919 to meet this demand.

By the mid-1920’s, activity spurred by the reclamation projects created an explosive period of residential construction throughout the Valley. So, construction moved at a rapid pace in Alvarado Place, a development located at the northwest corner of the Los Olivos subdivision.

The Extension of East Alvarado Road

In 1929, East Alvarado Road was extended out of Alvarado Place from Third Street to within 100 feet of Seventh Street. This resulted in two tracts being recorded, and the East Alvarado neighborhood was born.

Fits and Starts of East Alvarado Neighborhood and the 1930s

The real estate firm of Greene and Griffin enthusiastically promoted East Alvarado. In 1930, the firm’s construction partner, Home Builders, Inc. built the first home in East Alvarado as a speculative venture. Designed by C. Lewis Kelly, this “spec” house showcased the Spanish colonial Revival Style, the most popular style of the day.

Effects of Housing Architect in East Alvarado Neighborhood from The Depression

Popular styles, however, soon gave way to much larger forces as the decade of the 1930’s brought depression on a worldwide scale. Though its vibrant economy resisted, Phoenix also had succumbed to the economic malaise by the mid-1930’s. Government action would once more step in to jump start the fortunes of Phoenix.

Housing Shortages After World War I

The National Housing Act of 1934

The passage of the National Housing Act of 1934 created programs to foster an increase in individual home ownership throughout the country. As a result, additional impetus was provided locally through the efforts of Arizona’s powerful congressional delegation. Led by Senator Carl Hayden, the legislators were responsible for a rise in employment stemming from government projects.

The Federal Housing Administration (FHA), established under the National Housing Ace, would in large part mole the look of housing throughout the country during the next few decades.

The FHA’s requirements for standardized house forms, materials, and construction methods moved styling away from the romanticized Period Revivals of the 1920’s to a simplified style, now called the Ranch Style.

The Advent Of The East Alvarado Historic Ranch

With financing bolstered by FHA loan insurance, the new ranch styles became prolific. As a result, the 1930 “spec” house had remained the sole dwelling in East Alvarado until 1937. But, fueled by the FHA and employment from additional government initiatives, the remaining 29 East Alvarado homes would be constructed in only five years.

Based on FHA theory, East Alvarado was promoted as a model home development. Therefore, the efforts included establishing outreach programs to inform the public of improvements in construction standards, encouraging home ownership. This increased the awareness of FHA mortgage financing.

With uniform lots, setbacks and scale of structures, East Alvarado exemplified the “streetscape concept” promoted by the FHA to create uniformity and continuity of design. The intention was for enhancing sales and protecting real estate values.

Through the continued involvement of Homebuilders, Inc., East Alvarado would flourish. This resulted in homes built that are generally known as Early Ranch or Minimal Traditional Style.

There are several variations of the Early Ranch, including the Monterey-influenced Early Ranch house, characterized by tits “L”- shaped plan and low-pitched roof, and the French Provincial Ranch with its characteristic hipped roof and cornice molding at the eaves. Retaining a hint of the old, East Alvarado also contains several versions of simplified Period Revival Styles.

East Alvarado historic district history evidences the emergence of an architectural form that would come to epitomize the modern American West. From its origins in the late 1930’s, the Ranch Style house reflected the economics of the times. As a result, simplicity and adaptability of size and layout allowed the style to flourish. This was particularly in Phoenix where it would become the dominant design of the 1940’s and beyond.

Standing the Test of Time

The neighborhood of East Alvarado stands as testimony to a period of critical transition in the residential architecture of Phoenix. It was a model for the “suburban ranch” neighborhoods that would follow.