North Encanto illustrates the residential development trends of the 1939 -1956 period. It also contains one of the largest concentrations of intact Transitional/Early Ranch-style homes in metropolitan Phoenix, perhaps even in all of Arizona. The neighborhood clearly shows the effects that the policies of the Federal Housing Authority (FHA) had on tract development and street layout, as well as the interruptions and shortages of World War II, and the subsequent postwar housing boom. 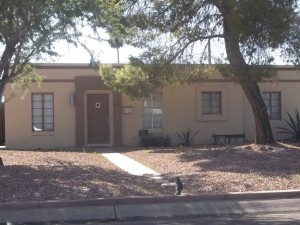 North Encanto Historic District housed many lawyers, doctors, salesmen, teachers, a streetcar conductor, a forester for the Indian Services, Several policemen and farmers and a wrestling promoter at Madison Square Gardens. Several early residents worked for the new large industries in Phoenix such as Goodyear, Airesearch and Reynolds Metals. 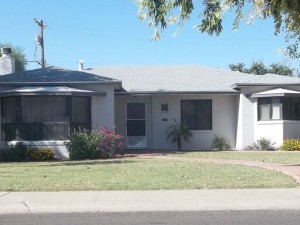 The North Encanto Historic District is predominantly comprised of Transitional Ranch-style houses, such as this one built in 1949

G. D. Hoy lived at 1530 W. Avalon who was a teacher at Phoenix College. Consequently, whom the P.C. stadium, Hoy Field is named after.

During the 1950’s Lincoln Ragsdale, mortician and leader in the Black community lived at 1610 W. Thomas and Bill Dickey, a prominent Black sports figure and golfer lived at 1614 W. Thomas.

The above historical information was written by the late Tom Denny, our resident historian whom I had the privilege of attending one of his classes several years ago. He recently passed away and was a remarkable person. 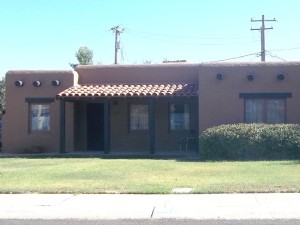 Development began in 1939 with the North Encanto Park subdivision containing 89 residential lots between 15th and 16th Avenues and from Thomas Road to Earll Drive. The first 51 houses were built by a syndicate who’s agent was Mr. Volney Bell. The plans were by Orville A. Bell, a prominent Phoenix architect and construction was by Broman & Chapman.

Additionally, Bell also designed the 1939 addition to the Arizona State Capitol Building, the Arizona National Guard Building in Woodland Park and several estate houses in the North Central corridor. The pre-war houses were mostly two bedroom, one bath homes. By February, ground had been broken on the first 29 houses, all of which had FHA financing. The remaining 22 applications were being processed.

Houses averaged $4,000 and the subdivision was scheduled to be annexed by the city. By September 1940, 20 homes had been occupied, 27 were nearing completion, 12 had been started and all of the remaining lots in the 89 unit subdivision had been sold. 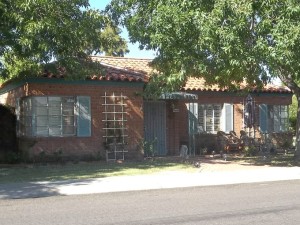 North Encanto Historic District History in the making continues in that by July 1941, construction had begun on the west side of 16th Avenue. And, in January 1942, Joseph Nuber announced the opening of an additional 25 lots of North Encanto Park subdivision facing what is now 16th Drive.  (It should be noted that there can be confusion in historic references as 15th Drive was originally called 16th Drive.16th Drive was called 17th Drive and 17th Drive was called 17th Place until the names were corrected in 1951).

Delayed Construction Due to War

Due to the War, construction on these lots on 16th Drive was delayed until 1944. In February 1944, Andy Womack announced the start of home construction in this and other sections of the city. Then, Encanto Terrace subdivision, between 17th and 18th Avenues south of Earll Drive, was developed starting in 1945-46 and Truman Terrace subdivision, North of Earll Drive, containing Flower Circle was under construction by 1946. In March of 1946, Alfred Andersen was building 22 houses on Flower Circle. 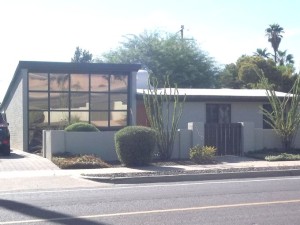 Even after 1944, when larger homes began to be built, they were still built in the Transitional/Early Ranch style. By about 1950, the style had evolved into what might be called the full Ranch or California Ranch style. Not everyone wanted a Ranch style home, however. There are also several Pueblo Revival and three Art Moderne style houses in the district.

The circular street plan of North Encanto appears to be the result of FHA design principles set forth in the “Recommendations for Successful Housing Development” published by the FHA 1938. The principles suggest a “general return to the village idea” and reflect the FHA’s contention that homes should be built on streets that are residential in character. As a result, the circular layout of the 1939 North Encanto Park subdivision was a significant departure from the grid layout typical of earlier developments in Phoenix.

There are seven different subdivisions within North Encanto:

Also known by “NENA,” you can check out their wonderful, NON-HOA neighborhood Association website  here.

Schools in and around North Encanto