The Beginning of Margarita Place

Margarita Place Historic District history dates back to 1931 and is packed with Tudor Revivals. The subdivision was originally platted to provide a quiet setting for well-to-do citizens, but as the population boomed along with war-time industry, more homes were needed. 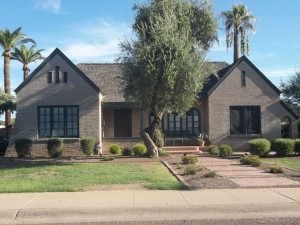 Its location boundaries are Thomas Road, Windsor Avenue, 15th and 16th Avenues. Margarita Place is within the northeast quarter of the northwest quarter of Section 31. Estabrook opted not to homestead the area, but to pay the government directly for the land, in order to avoid the restrictions and obligations that homesteading required.

According to a series of advertisements about the property, at some point J.C. Adams acquired the land that Margarita Place is situated on. The J.C. Adams who owned this land may have been the same J.C. Adams who arrived in Phoenix from Chicago and constructed the Hotel Adams, “a meeting place for the prominent,” (Luckingham 1989). In 1927, the area that is now Margarita Place was platted, surveyed and subdivided by Harry Jones, an engineer. 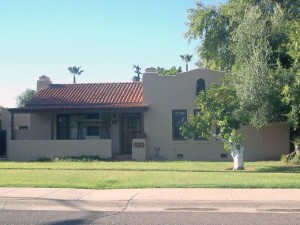 The Naming of The Margarita Place Neighborhood

Mary R. Lent became the owner of the property on February 24, 1927, and named it Margarita Place. Mary Kent opted to sell the subdivided land auction style, and as such sold the lots to potential builders, homebuyers and architects. The result of this was that many of the homes in the neighborhood were constructed by a number of different builders, instead of by one “community builder.”

One might draw the conclusion that this was an organization based on federal funding for war time housing, since there was a virtual ban on all non-war-related housing from approximately 1941 to 1945. The occupations held by the residents of these homes tended towards possible wartime occupations, and included an engineer, a mechanic, a construction superintendent, a physician and a life insurance agent. 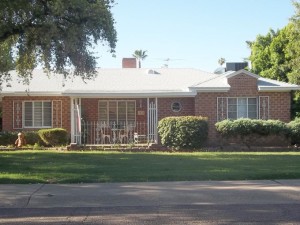 There were many subdivisions platted around the same time as Margarita Place, including Medlock Place at 3rd and Central Avenues, Pleasant Place, at 19th and Roosevelt, and Washington Park, between Washington, Madison and 24th. Sub-dividers needed to remain competitive by offering as many modern conveniences as possible.

Margarita Place, as well as other subdivisions, was also ideally located in what was at that time, a purely residential part of the city.

The first four homes built in the Margarita Place were constructed in 1931:

By 1942, the effects of the Federal Housing Administration were apparent in the Margarita Place subdivision. In that year alone, ten new houses were constructed, eight of them in the Transitional/Early Ranch style. Since the FHA emphasized the construction of groups of homes, rather than singular homes, it makes sense that a number of homes in the same style would be built in the same year.

The growth of Margarita Place is consistent with those of the nation and Phoenix itself. Consequently, the subdivision was originally platted to provide a quiet setting for well-to-do citizens. But, as the population boomed along with war-time industry, more homes were needed.

The Addition of More Homes In Margarita Place Historic District

As a result of the booming population, ten homes were added to the Margarita Place subdivision in the war era even though there was a hold on building and the corresponding materials. New Deal funding, such as that from the Works Progress Administration, was still available for developers at this time. Perhaps this was the reason that these homes could be built.

In the post-war period, more houses were added to Margarita Place. This is consistent with the rapid growth of Phoenix at this time. A majority of the homes built at this time were variations on the easily constructed ranch house.