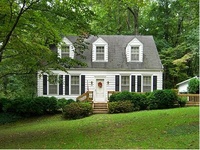 Cape Cod Architecture cottages is a style of house originating in New England in the 17th century. It is traditionally characterized by a low, broad frame building. Generally, they’re a story and a half high, with a steep, pitched roof with end gables, a large central chimney and very little ornamentation. There are a handful for sale in Phoenix.

The term Cape Cod House was used as early as 1800, in a comment by Yale College president Timothy Dwight on a visit to Cape Cod in Massachusetts. Even by then, the type had spread. By 1740, such houses had been built throughout most of New England, and also on New York’s Long Island. By 1790 it had made its way into southern New York State. Homesteaders brought the Cape Cod house with them to central New York, to the area around Lake Erie, and by 1830 into Ohio and Michigan.

Cape Cods are short, stout, and simple to the point of austerity. Nevertheless, they evoke powerful images of warmth and comfort, integrity and safety. A true colonial type widely copied to this day, the Cape Cod says “home.”

There are two Cape Cod styles, really: the originals, modest and practical houses built from 1690 until 1850 or so; and the homey Colonial Revival Capes of the 20th century. Phoenix, Arizona has its share. The originals were most often half or three-quarter Capes, shingle-clad, sited to take advantage of the sun’s rays, their interiors centered on the hearth-warmed kitchen. Revival houses, neat and nostalgic behind their white picket fences, are most often symmetrical full Capes, often clapboarded and shuttered, painted white, with more formal and flexible floor plans.

Regional variants with gambrel and bowed roofs (for headroom), and sometimes with small dormers (for added light in the loft space), appeared in Massachusetts and Connecticut. As the house type was brought west during the early 19th century, builders added popular Greek Revival details. Inside, the earliest houses were spare and simple, with floors and furnishings of pine.

Victorian Styles Ruled For a While

Although Victorian styles eclipsed the plain Cape, these houses came back, in greater numbers than ever, during the Colonial Revival of the 1930’s, often larger than the originals and with different framing methods, interior plans, staircases, and details. Owing to the romantic associations of 18th century models and the ubiquity of 20th century Capes, this is arguably the most recognized house style in America.

Early American settlers developed this Northeastern U.S. style, which is known for its gabled roof and plain front.

Next time you play Monopoly, take a look at the little green house you put down on Park Place. With its steep roof, central chimney and rectangular shape, the game piece is a good, albeit tiny, example of a classic Cape Cod home.

Cape Cods Were Developed by Early Settlers from England

Though the style is quintessentially American, the first Cape Cods were developed by early settlers from England in the 1600s. Partially inspired by the simple, thatched cottages common in Britain, the settlers adapted the style to keep out the harsh New England winter.

The big, central chimney was literally the heart of the home. It provided heat to all the rooms clustered around it, as well as light and, of course, dinner. Cedar shingles on the exterior and the roof also helped cut the cold. A steep roof quickly shed rain and snow. Everything about the Cape Cod style was adopted for its function rather than its form.

The style largely died out until Boston architect Royal Barry Willis reintroduced the Cape in the 1920’s as a contemporary housing option. He retained the basic exterior shape of a Cape, but adapted the interior for modern life.

Most of the Cape Cod homes you see today were built after World War II, when thousands of returning soldiers and their young families needed inexpensive housing. The Cape Cod style fit the bill, and it was used to build some of the first major housing developments.

If a historic Cape Cod is well preserved and properly restored, a new owner can easily adapt the space to modern life, Karam says.

That said, a historic Cape that hasn’t had a major remodel will probably have some of the typical old house headaches. Unlevel floors, smaller rooms, lower ceilings and an outdated kitchen are still common, In Capes from the 17th and 18th centuries, wooden floors sometimes covered an uninsulated crawl space that was once a root cellar, Karam says.

The original settlers would pack seaweed against the old stone foundation to limit the wicked drafts from off the water, explains Karam.

Because many Cape Cod-style homes were built around 1950, they often line the streets of established neighborhoods. That means communities with parks, sidewalks and friendly neighbors.

Though Cape Cod-style homes are available all over the country, Karam says it’s tough to duplicate the historic homes off the coast.

“The quintessential character of the Cape Cod house is the natural weathered gray cedar shingles,” explains Karam. “These elements work best near the salt air, where the cedar shingles oxidize to a silver gray, sealing them from the elements for three decades.”

If seaside living isn’t your style, pre-stained shingles can replicate the look away from the blustery northeast.

Both historic Cape Cods and revivals were originally starter homes, and they’re still good options for cash-strapped buyers. A small house on a modest lot costs less than the average new home. The cozy floor plan of a Cape is also good for empty-nesters or people who just don’t want the cost or hassle of having a huge McMansion.