Country Club Park Historic District is still consistent with residents who claim their homes are a source of comfort, joy, and pride.

Country Club Park Historic District History is recognized in both metaphor and reality of homes that homes provide shelter, warmth, and security, while presenting images that reflect the identities of those who live within them. 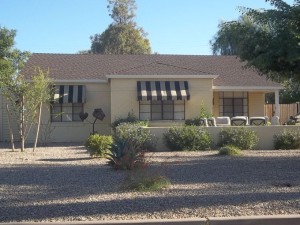 But what often goes unnoticed is the history that theses structures hold. While archaeologists plumb the depths of distant, ancient sites in search of understanding, we lose the grasp on our recent past by ignoring the history that surrounds us every day.

By establishing historic districts, the City of Phoenix has taken steps to preserve these noted structures and promote an appreciation for the heritage they embody. Representing a century of dramatic growth, the homes in these historic neighborhoods illustrate a broad range of architectural styles, construction techniques, and prevailing economic forces. No neighborhood better reveals the broad-reaching story of its dramatic and turbulent times than Country Club Park Historic District. 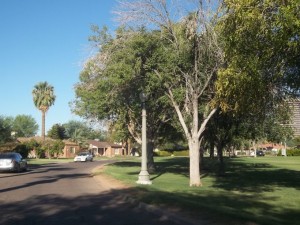 When first surveyed in 1867, the land that would be Country Club Park was known as the North half of the Northwest Quarter of Section 33, Township 2 North, Range 3 East of the Gila and Salt River Meridian Survey.

This dry and rambling label fit the arid, Spartan land, which had been untouched by human presence since the middle of the 15th century. But things were soon to change.

In that same year of 1867, a prospector named Jack Swilling planted the seeds of modern-day Phoenix. He reconstructed the ancient canals abandoned by the Hohokam people, some 400 years before. Establishing himself along the north bank of the Salt River, Swilling began to irrigate the land. This helped growing crops to supply the U.S. Army troops at Camp McDowell, 20 miles to the northeast.

Additional settlers quickly followed, and in 1870 the township of Phoenix was established and platted in a square mile grid. Activity increased as the canals were expanded and more acreage was brought under irrigation. The settlement of Phoenix began to supply the mining towns in the mountain ranges surrounding the Valley. In 1881, Phoenix was incorporated, and in 1889, the thriving city was designated as the Territorial Capital.

Only a year before, in the previous capital of Tucson, Charles H.C. Orme had filled a homestead patent that included the land upon which Country Club Place would be built. Land speculation in the Phoenix area became commonplace, with large blocks of real estate controlled by a small number of investors intending to resell for agricultural and residential development.

Orme held the land for only six months, then sold the northern half to Thomas W. Pemberton who, legend reports, had survived the Great Chicago fire of 1871 by wading in Lake Michigan throughout the night, his business records in hand. With his business safe and sold, Pemberton moved to Arizona with the intent of retiring to raise race horses on his new land. Too active to retire, Pemberton became treasurer of the Phoenix Savings Bank And Trust (First Interstate), Treasurer of the Arizona Territory, and founder of the utility we know today as Arizona Public Service. 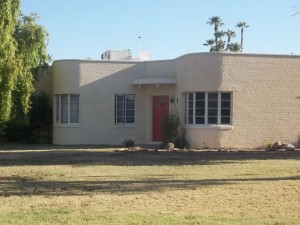 Even in the hands of an active entrepreneur, the future site of Country Club Park remained undeveloped. The early growth of Phoenix proceeded north as residents moved away from the flood plain of the Salt River. Channeled by the streetcar lines, development clustered along Center Street, now Central Avenue, expanding west as streetcar line spurs were added.

Growing and Flowing with the City’s River

The city’s growth also was checked by the vagaries of the river’s flows. Periods of drought would frustrate development as the economy receded in response to the dwindling water. The year of 1902 marked a pivotal event for the Valley. Passage of the National Reclamation Act established federal programs that led to construction of the Roosevelt Dam in 1911.

Completion of the dam harnessed the waters of the Salt River, which in turn produced the initial wave of rapid growth and prosperity in the 1910’s for Phoenix and surrounding communities. The project also foreshadowed the role that the federal government would play in the continued growth of the city a role that would lead directly to the development of Country Club Park. 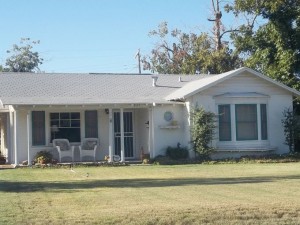 The year was 1939, and Phoenix was enjoying a third wave of new growth. The first wave, blunted by World War I, returned to crest in the 1920’s. Knocked back again by the Great Depression, growth would be restored by New Deal economics.

Of particular impact in the area of housing were the programs sponsored by the Federal Housing Administration (FHA). Create in 1934, the FHA was charged with rejuvenating the nation’s sagging housing industry. The federal agency encouraged and promoted home construction and ownership through the generous provisions of its loan insurance programs. 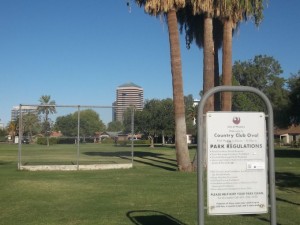 In return for these incentives, the FHA required that qualifying projects meet an array of standards designed to stabilize the housing market. Large projects were favored for their economics of scale and rapid impact on available housing. Uniformity in design and residential styles were promoted based on the prevailing theory that consistency in design would bolster value.

Still undeveloped, the Pemberton land was an excellent candidate for an FHA project. The parcel had passed to Pemberton’s daughter who in 1918 sold it to a Du Pont family heiress. Resisting all offers until 1937, Ecutheria L. Du Pont sold 30 acres to the City for the construction of North High School. Two years later, the remaining parcels, bounded by Thomas Road, Virginia Avenue, Dayton and Seventh Streets was sold to the Aetna Investment Corporation, the original developers of country Club Park. 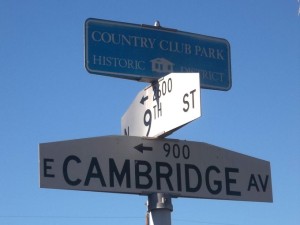 Opening in October of 1939, the debut of Country Club Park coincided with the plunge of Europe into World War II. For the next two years, the development thrived despite the war as 50 percent of the lots were developed through speculative sales and the efforts of numerous builders. Country Club Park was one of the last large residential subdivisions in the city to be developed in this manner. Before the projects’ completion, increased scrutiny by the FHA, teamed with the effects of war, would bring an end to conventional development for the remainder of the War years.

As with all other features, the architectural style of Country Club Park was dictated by the standards of the FHA. Simple, functional, and inexpensive, the Ranch Style home emerged as the predominant architectural style in Country Club Park. In fact, various version of the Ranch Style home became the prototype for FHA construction and would dominate the landscape of the country over the next three decades. Ranch styles would eventually account for 97 percent of the 142 homes within the Country Club Park subdivision.

Complementing the French Provincial, California, and Transitional Ranch Styles are several examples of the Spanish Eclectic and Art Moderne Ranch Styles. Basic features and forms are common to most of these variations of the Ranch Style, although Art Modern Ranch homes are particularly distinct. In general, they are one-story residences with low to medium pitched gable or hipped roofs, brick walls that are sometimes stuccoed. They also have metal-framed windows and often a porch over the entry or a broad eaves overhang to shade the entry walkway.

The Addition of Spanish Colonial Revivals

The Spanish Colonial Ranch often has a hallmark red tiled roof, white stucco walls and a massive stucco or brick chimney stack. With America’s entry into the war in 1941, the construction of homes across the nation was dramatically curtailed. But intervention by the federal government once again would counter the natural economic downturn to the benefit of the Valley. Safe from coastal attack, Phoenix was considered an excellent site for the location of war production plants. Sic additional military facilities were located in the Valley, giving rise to the need for housing.

The War Production Board (WPB)

All “non-essential” construction was halted, and development was put under direction of the War Production Board (WPB) with the interaction of three other federal agencies. Local businessmen formed the Eureka Investment Company to continue the development of Country Club Park under the auspices of the WPB. Still, attempting to honor the uniformity sought by FHA guidelines, the architectural firm of Lescher and Mahoney was retained to match the style of existing residences and plan of Country Club Park. Despite the limitations posed by wartime rationing, the substitution of materials allowed for construction of modest homes with only minor architectural adjustments.

Completion of Neighborhood After the War

By the end of the war, in 1946, the subdivision of Country Club Park was complete only seven years since its inception. With its roots in the pioneer West, the Country Club Park neighborhood transcends time to tell the story of wartime America. Its form, its style, and the materials that comprise it speak of that spirit and ingenuity of a national and the triumphs of its people through adversity.

Today, Country Club Park is not a museum. It is a vibrant neighborhood that draws strength and pride from its history to take its place in the fabric of a revitalizing downtown community.