Country Club Manor Historic District History and The Phoenix Country Club dates its early beginnings from late 1899. After formational meetings, one member, Col. William Christy, offered the use of his property, Central Place, on the northeast corner of Central and Roosevelt for a course site. 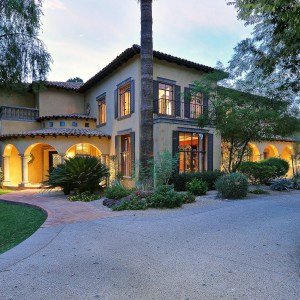 Work started immediately on the nine-hole course (dirt fairways) once considered the best golf links west of the Mississippi River. An immediate success both socially and athletically, the original membership of the Phoenix Country Club grew from 75 to nearly 100 by the time of the first tournament was held February 22, 1900.

The immediate success of the course required that it look for larger quarters. So, the summer of 1900 was dedicated to the erection of a new club house and a new course on Yuma Road at a location that is now occupied by Capitol School at the northeast corner of Van Buren and 17th Avenue. The grand opening was on January 1, 1901. Van Buren at the time was called Yuma Road west of Center, now Central, and Tempe Road on the east side.

The clubhouse quickly became the place for many social events for the women of Phoenix as well as evening dances. By the summer of 1902, dirt  tennis courts were constructed and that fall the first tournament was held.

Ten years after opening, the Phoenix Country Club once again had outgrown its facility. After much discussion, the club purchased 80 acres along Center (Central) with forty acres north of the Arizona Canal and forty acres south. The nine-hole golf course on the north side of the canal was still dirt with sand greens and the club house was on the south side of the canal.

With this move, the organization changed its name to The Country Club of Phoenix. Increased use of the course encouraged the club to purchase an additional twenty acres in order to allow for 18-holes.

But various financial constraints did not enable this to happen. The stockholders decided it was better to purchase a larger area and build from scratch than to try to remain at the north Central site.

The Purchase of 160 acres of Williams Ranch

Charles F. Ainsworth purchased the old club property at the end of Central Avenue. Consequently, the corporation purchased the 160 acre Williams Ranch on the northeast corner of 7th Street and Thomas Road in early 1920.

Another Name Change for The Phoenix Country Club

Once again, the corporation changed its name. This time to The Phoenix Country Club.

Lescher and Kibbey, Local Architects In 1922

The firm of Lescher and Kibbey, local architects, were hired to prepare plans for the new club house which opened in January 1922, while the new golf course became the first in the area with grass fairways. Although club members early on desired a pool at this new site, it was not until 1927 that funds were authorized for it construction.