A true Colonial Style house is one that was built during North America’s colonial past. 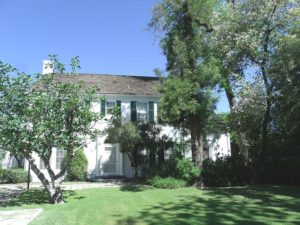 American Colonial Architecture and Colonial Revival styles emerged in the late 1800s as a rebellion against elaborate Victorian styles. Many houses built during the twentieth century can be described as Colonial Revival. Colonial Revival houses have the simplicity and refinement of old Georgian and Federal houses from American history, but they incorporate modern details. There are several for sale in Phoenix.

While Colonial Revival and Neocolonial houses share many features, you will discover amazing variety.

“Colonial” originally referred to the houses of the 17th-century European colonists who settled in what would become the United States. Those long-ago settlers built houses that reminded them of home, though they adapted the structures to suit the regions where they lived. English settlers built cottages clustered around a commons, for example. Dutch settlers incorporated stone and brick into their homes, a technique they learned in Holland.

Early Colonial homes didn’t look exactly alike. What they had in common was their symmetrical designs, steep roofs, massive central chimneys, and small windows. That last feature wasn’t a style statement. Glass simply wasn’t plentiful in the early colonies and it was expensive. Colonists had to pay a tax on glass; only the wealthy could afford to have a home with many windows.

From the late 16th century until the beginning of the 19th century, the Colonial style dominated the landscape of the newly settled areas in North America. The styles ranged between New England and Cape Cod Colonial, Spanish Colonial, German Colonial, Dutch Colonial, French Colonial, and Georgian Colonial. Each style emerged in the specific country’s territories, however the styles continued to evolve in order to perfectly suit each region.

Nowadays, the Colonial style has seen a revival and it has been revamped for the modern age, while still holding on to the classic characteristics used by the colonists all those years ago.

After the Centennial International Exposition in 1876, the citizens of the United States of America experienced a renewal of interest in their own history and the Colonial Revival architecture spread throughout the nation.

With such extensive history, Colonial style houses have withstood the test of time and continue to experience popularity all around the United States today. Renewed, yet still carrying our country’s history, the Colonial houses of today incorporate the same symmetrical and elegant facades. Plus there are some modern ornamental additions that continue to please current homeowners.