Uptown Phoenix was a hot spot for restaurants, shops and clubs in the 1970’s and ’80’s.

Then the cachet fizzled a bit as the Valley’s suburbs boomed.

But Camelback Road and Central Avenue, the heart of Phoenix’s uptown area, as well as Phoenix’s Midtown area, are back as a thriving hub for popular restaurants, cool boutiques, office space, light rail and historic neighborhoods and their homes. 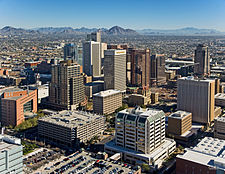 It’s now the Valley’s most popular intersection, according to a new poll among real-estate and growth experts.

Urban Land Institute Arizona members recently voted the central Phoenix spot the “hottest intersection” in metro Phoenix. It beat out Phoenix’s Camelback and 24th Street, an area that garnered the title the last time the group voted a decade ago.

“Camelback and Central has old buildings with great design, diversity and very supportive neighbors,” said Craig DeMarco, restaurateur and a founder of Upward Projects, at the Urban Land contest last week. “It’s the only intersection in the entire Valley with four historic neighborhoods surrounding it.”

A lot has changed since then. A boom and bust, light rail and a move toward an urban lifestyle by more Valley residents have shifted our growth.

Plus, DeMarco’s group has opened five restaurants, including a Postino, Windsor and Federal Pizza, around Camelback and Central over the past decade.

Four intersections that made the top 10 in 2007 didn’t make the new ranking: Scottsdale Road and Mayo Boulevard; 95th and Glendale avenues; 99th Avenue and McDowell Road; and Price and Willis roads.

“We have restaurants around most of the intersections on this list,” he said.

“I don’t look at numbers. I just drive around looking for the coolest neighborhoods.”

To buy or sell a historic Phoenix Home, contact Historic Homes Specialist, Laura B. today at 602-400-0008. Read about Laura B. here from her client testimonials.