Train Depot Home Up For Sale In Phoenix

There are a lot of very cool homes in the Valley, but some stick out more than others. 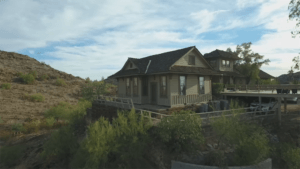 Train depot home up for sale in Phoenix

In North Central Phoenix sits a home on top of a hill that has a unique history. It used to be a train depot in Mayer, a town more than 70 miles north of Phoenix.

The history is very cool. The train depot began operation in Mayer in 1898. It was in full operation until it finally shuttered in the 1950’s. For years it sat decaying to the ravages of time, but a Phoenix man named Don Dedera had a great idea: ship the depot to the Valley and turn it into a home.

So, in early 1963, the train depot was placed on a moving truck and shipped south.

It wasn’t an easy task. It was brought down the Old Black Canyon Highway and telephone and power lines had to be moved out of the way. At one point, the moving truck turned toward the Deer Valley Airport and was able to drive down the runway to avoid even more telephone lines. Eventually, it ended up on a hill and became part of a new home.

Fast forward to a few years ago, the most recent owner, Will Auther and his wife spent nearly a year fixing up the home, and they lived in it for nearly 13 years.

Now, they’ve decided to put it on the market. They hope that someone will take it over and keep the history of the home alive and help to keep the story of the traveling train depot alive.